Family skeletons? My family are old hands at brutal excavations

Hilary Fannin: In truth the past loses its potency the closer you get to being the past yourself 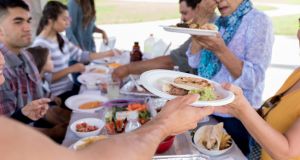 I’m not long home from a week’s family holiday in Andalusia, where my sister now lives in a small mountain village. Accessed by a corkscrew hill, it sits among brown and purple slopes, some dotted with olive groves, others slathered in plastic sheeting under which the farmers grow their irrigated crops.

The village contains one shop, one trough, a couple of horses, the occasional foal and just the one central bar on the main square, which is frequented both by the locals and by a bunch of nervy (if well-tanned) inglesi.

This summer, as with last, the inglesi – largely retired couples who’ve traded suburbia for secluded sunshine – gathered around the bar’s plastic tables under the false-pepper trees and speculated about what was going to happen to their pensions and health insurance if and when Brexit stopped toying with their ageing psyches and finally got down to its nefarious business.

Also on the town’s main square, the horse trough, which long predates the current politics and will surely long outlive it, is made of stone. Grey and ancient, its edges are smoothed out from centuries of horses’ necks and children’s palms leaning on it to drink the clear water that runs down from the well above the town and trickles into the trough’s hollowed-out basin from an old brass tap.

Finally it will be too hot to do anything, to sell or buy anything

Sitting outside the bar (where a tostada and a coffee will cost you a couple of euro and the gin spills from bottle to glass like a waterfall), you can watch people come to drink from the tap before navigating their way home along the steep streets in the shadow of the terracotta rooftops.

Wait on the square long enough, in a lozenge of shade, and the bread man will drive up the hill, blasting his horn to alert customers, then park next to the trough and open up the back doors of his van to sell loaves and sugared pastries. Wait a little longer in the growing heat and the vegetable seller will come too, and do the same thing; and then there’s the egg van, and the fish van, and maybe even the meat van with its pinky-grey slabs of pork on display.

And finally it will be too hot to do anything, to sell or buy anything, and the coffee cups will be collected and the bar will close and the village will become entirely still.

Life is quiet there, with little to entice the holidaymakers who are ladled into Malaga airport and bussed straight to the coast. The seductiveness of the place lies in its mountainous isolation, in its siestas and tapas, in the predictability of the heat, in the dry din of the crickets, in the way people wander gently down to the square in the evenings when the sun has cooled.

It is in watching sinewy old ladies gather under the trees with their fans, or in seeing mothers and fathers lean in to kiss small children who chatter and whoop like understory birds. (The Spaniards seem kind to their offspring, and tolerant too of the foreigners who buy dark wooden-beamed village houses, turning them into homes of their own with detective novels on their bookshelves and lamparas hanging on the walls.)

I watched the young people around the table, their expressions darting between boredom and sympathy

My sister, who is a cook, originally came to the village to take up a job offer, but has now decided to stay, to call it home. She and her husband have seasonal work on the coast, bringing tourists out for day sails on a catamaran; the rest of the time she gardens and paints and cooks for her friends. I don’t think she’s ever appeared happier.

There were almost a dozen of us on our holiday: my brother, my children, my niece and nephews, all of us scattered around the village in various accommodations. After walking nightly up the hill to my sister’s table, we sat and ate and drank too much and dug up our shared past like determined toddlers with seaside spades until we came to the dark wet sand where the lugworms slithered.

As a family, we’re old hands at that kind of brutal excavation, but in truth the past loses its potency the closer you get to being the past yourself.

I watched the young people around the table, their expressions darting between boredom and sympathy while, under the fat pink moon, in the darkened village above the Mediterranean, we talked about personal histories and social mores that must seem, though less than a handful of decades past, as arcane to them as the sight of a dove-grey horse bending its head to the village trough does to me.