What’s a ‘push present’? A gift given to woman who has pushed out a baby 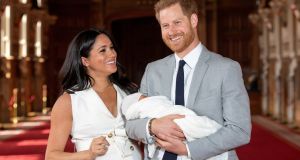 Meghan and Harry with the newborn Archie. A push present doesn’t have to be fashioned from diamond, platinum or gold but a piece of postpartum bling has been spotted on Meghan’s finger. Photograph: Dominic Lipinski/Reuters

Could I just state for the record that I have never been in receipt of a “push present”?

“A what?” you cry from under the sink, while you search for that squidgy plastic window-cleaner yoke you fired under there last November when the pesky sun finally ceased to illuminate the streaky glass.

“What in the name of the divine Jaysus is a push present?” you ask, having just unearthed an ancient, if erect, tube of Polyfilla.

Well, for the uninitiated among you, a push present is a gift you receive from your partner after bursting your capillaries to push out a baby.

Hailing, as I do, from a bygone era when one staggered out of the labour ward with a mewling infant in one hand and a pair of disposable knickers in the other, and with no expectations of receiving a gift from anyone, the concept – not to mention the term itself – seems a tad absurd.

I remember hoping, after childbirth, that someone might materialise with tea, or maybe gin, or both. And hey presto, my old mate Lynn turned up in the airless ward with a bottle of Cork gin (it was in the days before they were making gin out of herbaceous borders), a couple of tonics and a lemon. (Sadly, however, she forgot to smuggle in any ice.)

The push present (I’d like it to be noted here that those two little words are sticking in my gullet like a piece of fatty mutton on a wet Wednesday) apparently originated on the other side of the Atlantic. (You don’t say.) Their current popularity will no doubt be boosted by the piece of postpartum bling that was recently spotted on Meghan Sparkle’s finger.

Various minor Irish celebrities, while gleefully displaying their pedicures and infants in some terribly exciting domestic gossip magazines, have also been prattling on about their gemstone maternity gifts.

Fear not, however. According to the yummy-mummy websites, a push present doesn’t necessarily have to be fashioned from diamond, platinum or gold. Why, with a little bit of creative thinking on the part of one’s weary, sleep-deprived partner (who has just had to remortgage the house to pay the parking fees at the maternity hospital), there are all sorts of exciting and intuitive gifts that can be purchased for a new mother. (And no, I’m not talking about a tube of haemorrhoid cream and a half-bottle of Valpolicella.)

“Having a baby is hard work!” I read on one of the many “crummy mummy” websites. “So we all deserve a present or two when we do push our little one out!”

“Why not leave a list open on your browser for your other half to accidentally stumble across?” suggests one slummy mummy, going on to list costly treats that aching, bullet-breasted young mothers are supposed to aspire to.

A spa day or a shopping voucher! (Because queueing up for a changing room with clothes that won’t fit is exactly what you want to do when you haven’t slept for a thousand years). A hairdressing voucher! (Because little in life beats a blow-dry!) Or a holiday! (Sorry, mate, the aforementioned parking fees have put paid to any chance of leaving this damp island until the child can lend you its Confirmation money.)

Or how about jewellery! Yep, we’re back to jewellery again. This time, however, the bloggers suggest a chilling twist: jewellery in the shape of a newborn’s tiny foot or hand. Am I alone in finding this idea vaguely macabre? Should young mothers really be encouraged to trot around the place with their baby’s clenched fist hanging around their neck? That’s some metaphor for parenthood, eh?

Maybe there’s something wrong with me, but, honestly, I’d rather stir-fry a kitten than come home from a maternity hospital to be bombarded with the kind of competitive, girlie-stereotyping acquisitions that are being suggested.

I’m exhausted already from just scrolling through the crucifying consumerist content aimed at our beleaguered daughters. How are these young women supposed to keep up?

From champagne-brunch bridal showers to five-star baby showers, from Botox to balayage, from pumped-up lip jobs that look like inflatable life-rafts to three-day wedding events that include barbecues, bicycling, ballooning and bawling your head off because your mother-in-law-to-be thought the marbled macaroons were paperweights, it’s all just too much.

Sleep. If I was gifting any woman a push present, I’d push that grizzling baby around the block in its “travel system” and let the woman sleep – a timeless gift that’s free as the air.