Magdalene survivor: ‘I was raped by a priest. I want to tell my story. It is with me always’ 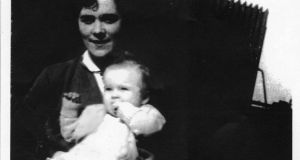 Mary Merritt’s baby was taken from her to be adopted. This picture shows the only time she held her baby daughter

Seven years ago a small red exercise book was put on display in the Little Museum of Dublin. A sticker announces its purpose: “Laundry Lists Writing-In Book.”

The artefact was ignored by most visitors, which is hardly surprising. At first glance the contents are innocuous, for the copybook contains only a list of names: of families, companies, schools, clubs, religious orders and State institutions. They were clients of the largest Magdalene laundry in Ireland.

In the museum, small objects are used to tell a larger story – about Dublin, about Ireland and about the large, very odd family to which we all belong. But in trying to record our complex shared history, we also want to be inclusive. Some visitors are religious, others are not. Most people come to be entertained as much as educated.

More than 10,000 women and girls spent time in the laundries, which operated with the blessing of an unholy trinity of family, church and State

For these reasons we struggled to find an appropriate way to talk about the ledger on guided tours of the museum. It is not something that can be referenced with a quip. It demands scrutiny. Because that copybook, in which neat red ticks denote the completion of a job, is not merely a list of clients.

It is also a damning indictment.

In the 1950s this country locked up 1 per cent of its population. We incarcerated more people per head of population than Stalin did in Russia. And the Catholic Church played a leading role. Until very recently, religious institutions ran orphanages, industrial schools, homes for single mothers and the now-notorious Magdalene laundries.

The laundries started before the foundation of the State, apparently as places of respite and training for women, prostitutes in particular. However after independence they soon became places of arbitrary detention: for orphans who had grown up in State care; for cruelly named “fallen women” who had given birth outside marriage (often as a result of rape); for girls who were simply outspoken or even high-spirited.

Women who didn’t conform to the demands of a society with a strict moral code were locked away “for their own protection” – the medieval logic of the laundries – and forced to do backbreaking unpaid work in businesses run by religious orders. Mortality rates were shockingly high, and some victims were buried in communal graves, sometimes unmarked and unrecorded.

More than 10,000 women and girls spent time in the laundries, which operated with the blessing of an unholy trinity of family, church and State. Nobody knew what was going on behind those walls – and everyone knew. In fact, every Irish person over a certain age is implicated in this story, whether they like it or not. That includes me.

She still has the scars on her body. She still wakes up crying in the middle of the night

I was 24 years old when the last Magdalene laundry closed in Dublin in 1996. Old enough, that is, to vote, to care about notions such as truth and justice and to feel outraged by human rights abuses in Rwanda and Bosnia. Yet here at home I ignored the shocking reality of life for some people – a reality that was hiding in plain sight. (As a nun once put it to The Irish Times, “There are very serious problems in Dublin if we could only get our hands on them. Girls arriving up here from the country with no money and nowhere to go.”)

Two decades later, Irish society was beginning to come to terms with the brutal reality of life in the laundries. Our ledger had come from High Park, a laundry in Drumcondra that was run by the Religious Sisters of Our Lady of Charity. In addition to the many ordinary families whose names are listed, there are also emblems of Official Ireland, such as the Department of Justice and Áras an Uachtaráin. This copybook could be used to tell a larger story. But how?

We knew that the power of one person’s story might be the best way to explore its meaning. However, many of the survivors were reluctant to talk in public, while others had escaped from Ireland for a new life overseas. Among the emigres was Mary Merritt, who was interviewed for the BBC Panorama programme in 2015. Born in a Dublin workhouse, Mary spent her childhood in Ballinasloe, in the care of the Sisters of Mercy.

At the age of 16 – “I was a bold child” – she was caught stealing a few apples from an orchard and was sent to High Park. Renamed Attracta by the nuns, she spent the next 14 years enduring horrific trauma and abuse. Escaping from the convent, she went to a priest and begged for help. Mary was raped by the priest and became pregnant with a baby she met only once before the girl was given up for adoption. She told her story to Miriam O’Callaghan on RTÉ radio in March 2018.

At the age of 83, Mary was brave enough to share her story with the BBC. Would she be willing to share her memories of High Park with our visitors? A couple of phone calls later I had her email address. Mary was living in Tunbridge Wells, and eager to talk: “I would like to take up your invitation and tell you my heartbreaking story. It is with me always.”

Over the next 12 months I spent many hours with Mary and her husband Bill. Married for more than 50 years, they are utterly devoted to each other, and today, at the age of 88, Mary remains as “bold” as ever. Chatty and warm, she has a loud, slightly wicked laugh and delights in spending some of her compensation money by staying in a posh hotel on her visits to Dublin.

Mary once met Paul McCartney and still raves about the experience; takes her neighbour’s dog for a walk every morning; sends thoughtful cards in the post. But her voice hardens when she recalls the misery of life in High Park. She still has the scars on her body; still wakes up crying in the middle of the night; still wants an apology from the church. When she talks about these things it is with the resolve of an extraordinarily strong woman who would not be silenced by malicious forces.

Last year, Mary was in Áras An Uachtaráin when President Michael D Higgins apologised to the Magdalene survivors on behalf of the State. Mary used to do the laundry for the Áras. However, she admires our current President. “He is,” she says, “a lovely man.” Reflecting on this it is tempting to conclude that the story has played itself out, that we are now reconciled to the past and that wrongs have been addressed. But Mary Merritt is still waiting.

“I never received an apology from the church,” she told me recently. “And I am still angry. I want that apology before I die. And until then, I will continue to speak out.”

In Ireland, artists were once internal exiles. These days they play a key role in commemorating the past, which Fintan O’Toole has memorably described as “an act of imaginative sympathy as it is of historical reconstruction.”

Inspired by the remarkable work of theatre-makers like Louise Lowe and Selina Cartmell, and encouraged to be fearless by Mary herself, we introduced her to the writer and director Gerry Stembridge, the designer Stephen Dodd and the actor Amy Kidd. Together we have created a new work that will receive its premiere at the Dublin Theatre Festival. Lasting 15 minutes, it can only be seen by one person at a time. At the end the audience is invited to inspect the High Park ledger.

You Can Leave at Any Time is not exactly a play, a memoir, an art installation or a museum exhibition, although it is indebted to each of these forms. We don’t care what people call it, though we do know that some will find it an uncomfortable experience. If my contemporaries feel a measure of shame, that is not inappropriate. Younger visitors may be shocked to discover quite how recent it all was.

We hope that people of all ages will be transported, horrified and ultimately inspired by the story of a woman who refused to allow her life to be ruined by powerful men and women who were almost unimaginably cruel.

Trevor White is director of The Little Museum of Dublin. You Can Leave at Any Time runs from September 29th to October 5th. dublintheatrefestival.ie

Renault unveils its eVision for the future of the Megane
10

Can buying the right petrol save your conscience and the planet?
Real news has value SUBSCRIBE