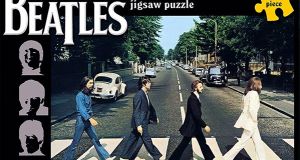 Hello, hello: a chance meeting after a break from The Beatles jigsaw

It finally happened. We cracked open the 1,000-piece jigsaw I was given by my partner as a Christmas present. I would dwell further on this choice of gift but regular readers may remember he is the same person who once gave me a set of coat hooks for Christmas, so a jigsaw of The Beatles crossing Abbey Road constituted a significant raising of the bar.

Obviously, I had no intention of ever opening the box. When would I ever find time to do anything as pointless and mundane as a jigsaw? I lived, as you did, a very full life back in the day aka, early March 2020. I had places to go, people to see.

As a Beatles fan, I did appreciate the thoughtfulness of the present and enjoyed it as a piece of cardboard art. I kept it out on display. The box made me happy. There goes John, heading up the group, hands in the pockets of his white suit, I’d think. And Ringo, the luckiest drummer man in the whole world. And dreamy Paul with no shoes on and a fag hanging from his fingers. And George, in all his double denim, hippy nonchalance.

I felt terrible about it, but the 'stop and chat' was happening, and there was nothing Micheál Martin or I could do about it

In my wildest, weirdest dreams I never thought I’d actually be at the kitchen table trying to figure out which shade of white belonged to the zebra crossing and which matched better with John’s white suit. But apparently that’s what 40 days and 40 nights into a lockdown looks like for some people.

Incidentally, when you crack open a jigsaw you realise very quickly why they are mostly a thing you do on holidays because the place you are renting has one and there’s a designated jigsaw table on hand.

Jigsaws do not work in normal houses, especially during a pandemic. The kitchen table is already crowded with miscellaneous stuff, including music books, working-from-home documents and the bread bin. The bread bin is currently double jobbing as a laptop pedestal because – and you can have this pandemic tip for free – the elevation of the laptop really helps aesthetically during Zoom gatherings especially if you have chin issues.

Defeated by the trees that line both sides of Abbey Road, I went for a cycle. After some time I realised I was slightly outside my 2km. I got off the bike, feeling furtive. I realised I was near some friends’ houses and was tempted to go and ring their doorbells before running across the road for a socially distant chat.

Just as I was trying to banish these unpatriotic thoughts a man came towards me carrying a bag of groceries. On closer inspection I saw it was Micheál Martin, leader of Fianna Fáil, the man who might soon be taoiseach.

“Hello Micheál,” I said before I could stop myself. He looked at me and kept walking. Then in an explaining kind of voice I said out loud: “It’s Róisín.” And then as he continued to squint at me, puzzled, instead of just leaving well enough alone, I smiled and added “Róisin Ingle, The Irish Times”.

With my full name and place of work uttered with such enthusiasm there was nothing for Micheál Martin to do but stand and engage in small talk with me. I had coerced him into what American comedian Larry David calls a “stop and chat”.

I felt terrible about it but the “stop and chat” was happening and there was nothing Micheál Martin or I could do about it.

We had to plough on.

The laptop is on the breadbin. I forced the nearly-taoiseach to tell me about his rhubarb, and I am demented trying to finish a jigsaw of Abbey Road. Send help

Motioning to the messages he was carrying, I asked him about the shop from which he’d just emerged. Micheál Martin said he had got some very good rhubarb in there recently. So I asked Micheál Martin if he’d made a crumble with it and he said a crumble was a bit beyond his capabilities but he had boiled it up and eaten it with some yogurt.

If I’m honest the yogurt part caught me off guard. That might be why I suddenly found myself telling Micheál Martin that I was a little bit outside my 2km, like I was in confession and he was a priest with a fondness for stewed rhubarb.

He was very understanding about my transgression. We talked about how surreal it all was and the ways he was trying to help people and eventually, I let him go on his way.

Micheál Martin looked relieved, and I can’t say I blame him.

I was scrolling social media a couple of days later and saw what I think is the perfect description of what is happening to many of us – okay me – at the moment.

Jennifer Canesten was going to the chemist when she saw a school friend of her 12-year-old daughter.

“Are ye gone mad yet?” the girl, who was cycling around in circles, shouted over.

“We’re COMPLETELY MAD NOW!” the girl roared in response before pedalling off home.

And that’s about the height of it really. I’m doing circles on my bike. The laptop is on the breadbin. I forced the nearly-taoiseach to tell me about his rhubarb, and I am demented trying to finish a jigsaw of Abbey Road.