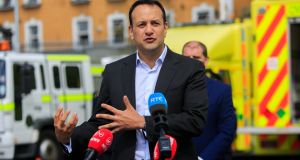 Taoiseach Leo Varadkar speaks to media during a visit to the Civil Defence on Wolfe Tone Quay, Dublin on Monday. Photograph: Gareth Chaney/Collins.

Taoiseach Leo Varadkar has said that the Government will examine how it can get Irish workers to fill seasonal jobs such as fruit pickers and agricultural workers.

He said that the Government would work with the sector “to see if we can find an adequate number of Irish people or people resident in Ireland at the very least who will take up those positions”.

If not, Mr Varadkar said, “we have to take a decision: do we allow the crop to fail, which isn’t a good thing, or do we allow workers to continue to come in from other parts of the EU but with very defined and monitored quarantine arrangements.”

Mr Varadkar said that the Cabinet sub-committee on Covid-19 would meet on Monday to discuss nursing homes, testing and foreign travel, especially whether to continue to allow foreign agricultural workers to arrive in Ireland.

“We need essential workers to be able come in and out . . . but we also make sure it’s done in such a way as minimises the risk of the transmission of the virus. And that means asking people to self-isolate, to self-restrict their movements for 14 days - that has been done since the very start of this outbreak but what we’re looking at now is are the better ways that we could monitor that people are actually doing that.”

On lifting the coronavirus restrictions, Mr Varadkar said that the Government was working on a plan for the staged lifting of restrictions.

“What we’re working on at the moment is a plan that will be ready by the end of April-early May in advance of the May 5th big day if you like. And what we hope to set out is a step-wise plan which indicates how we would reopen the country in different steps and what are the criteria that would have to be met to move from one stage to the next.”

Mr Varadkar said until that plan was ready, he would prefer not to speculate on what would open first.

“I really understand that a lot of people are beginning to find the lockdown, starting to find the restrictions very difficult, and I’d prefer not to raise hopes or raise expectations only to dash them,” he said.

He said he hoped that in May the Government could authorise the reopening of “certain services, certain parts of the economy and then review it every two to three weeks.”

“But I’d rather give people certainty when we have that towards the end of April or early May,” he said.

Mr Varadkar said the government had a plan to provide childcare for healthcare workers, but would wait to have the plan assessed on public health grounds.

“We have worked up a solution - the money is there to do it. But it does require public health clearance from the National Public Health Emergency Team so they’re going to discuss it again tomorrow and hopefully we’ll be able to provide that. But I know it’s been very delayed and I know that people are very frustrated about it.

“If the [NPHET] approve it, we hope to be able make an announcement this week. But there’s a couple of ifs there.”

Mr Varadkar said it was “probably true” that the virus would come in waves, pointing to the example of Japan, where the second wave of the virus was now hitting, he said. He said that public health authorities did not know how many people had been exposed to the virus, and “we won’t know that until we have an accurate antibody test”.

He said “it could be one per cent, it could be 25 per cent” of people who had been exposed to the virus and had immunity.

Mr Varadkar conceded that it would have been better to commence testing for the virus in nursing homes earlier but he said that “last week and the week before we had a massive backlog of tests - and they were tests of people who actually had symptoms, so even if we had done the tests, we wouldn’t have got the test results.

“And also from day one, making sure that we looked out for congregated settings - nursing homes, prisons, homeless hubs, direct provision centres - anywhere where there’s a lot of people congregating.

“So it’s never been a case of prioritising one over the other - we’ve been trying to do all six of these things all at the same time and we’ve run into problems with all of them actually at one point or another, and we’ll continue to do so. But I think overall we’re doing the best that we can in a very difficult situation.”

Mr Varadkar said that “nobody can say” whether it would have made any difference if restrictions on nursing homes had been introduced earlier, and said that he would not second guess the recommendations of the chief medical officer who had told nursing homes there was no need to restrict visitors last month.

On government formation Mr Varadkar reiterated that Fine Gael and Fianna Fáil would have to be joined by a third party to make a new government viable.

He said that Fine Gael had stood aside after the election but that it was not possible to form a left-led government and said that those who sought such a government “seem to have given up trying at this stage”.

Fine Gael had been willing to “step into the breach” he said and was now reaching out to smaller parties to see if a government could be formed.

“But we do need a third party and we do need to make sure it’s a majority government and one that can last”.

He said there had been “very little discussion” on who should fill what job and who should be Taoiseach first.