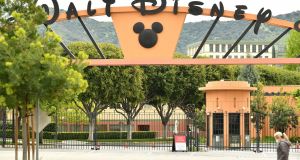 Walt Disney will stop paying more than 100,000 employees this week as the company tries to weather the coronavirus lockdown. Photograh: Amy Sussman/Getty Images

Walt Disney will stop paying more than 100,000 employees this week, nearly half of its workforce, as the world’s biggest entertainment company tries to weather the coronavirus lockdown.

Suspending pay for thousands of so-called “cast members” will save Disney up to $500 million (€459m) a month across its theme parks and hotels, which have been shut in Europe and the US for almost five weeks.

But slashing fixed costs in a more severe way than other theme-park owners such as NBCUniversal and Warner Media has raised significant reputational risks for the century-old empire behind Mickey Mouse.

The decision leaves Disney staff reliant on state benefits – public support that could run to hundreds of millions of dollars over coming months – even as the company protects executive bonus schemes and a $1.5 billion dividend payment due in July.

By contrast some big multinationals, including L’Oréal and Total in France, have vowed to forgo state aid in a show of solidarity with taxpayers.

Disney over the past month has raised debt and signed new credit facilities, leaving the company with about $20 billion in fresh cash to draw upon for a downturn. “They could afford [not furloughing staff],” said Rich Greenfield, analyst at BTIG.

However, he cautions that Disney is probably braced for a “very prolonged shutdown”. Disney made nearly $7 billion in operating income from its parks, experiences and products business last year, making up nearly half of all operating profits. Shares in Disney have fallen by a quarter since the outbreak of the virus.

“With labour accounting for approximately 45 per cent of operating expenses and 33 per cent of total expenses, we assume notable savings,” said JPMorgan’s Alexia Quadrani, who estimates the furloughs, alongside other cost cuts, will save Disney about $500 million a month.

Disney will provide full healthcare benefits for staff placed on unpaid leave. From Monday onwards, it urged US employees to apply for the extra $600 a week of federal support available through the $2 trillion coronavirus stimulus package.

In Orlando, home to more than 70,000 Disney cast members, Florida offers unemployment payments of up to $275 a week for 12 weeks – among the lowest rates in the US.

Salary payments will also be stopped for most of the 17,000 staff at Disneyland Paris, who will be placed on France’s “partial activity scheme”. This allows companies to reduce staff hours or furlough workers while the government covers up to 84 per cent of their net salary.

Top Disney executives have made salary sacrifices to “better enable the company to weather the extraordinary business challenges”. Bob Iger, executive chairman, gave up the remainder of his $3 million salary for this year, while Bob Chapek, who recently replaced Mr Iger as chief executive, will forgo half his $2.5 million base salary.

But Disney has protected its incentive schemes, which account for most of the executives’ remuneration. Mr Iger earned $65.6 million in 2018 and $47 million last year, The latest package is more than 900 times that of the median Disney worker’s earnings, which stands at about $52,000.

Speaking at Disney’s shareholder meeting in March, Mr Chapek said: “Our ability to do good in the world starts with our cast members . . . who create magic every day. Our commitment to them will always be our top priority.” – Copyright The Financial Times Limited 2020