In their Ted talk George and Pollock explore how "climbing into the raging river of grief when tragedy strikes can be the way to get to the next place”; 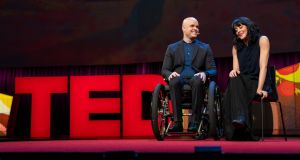 A Ted Talk by an Irish couple – explorer Mark Pollock and human rights lawyer Simone George – about using acceptance and hope to deal with grief, from this year’s annual Ted Conference in Vancouver in April was released on Friday September 7th. It has received more than half a million views.

The blind adventure-athlete Pollock, who broke his back in 2010, and lawyer and activist George, who started research on paralysis cures from beside his hospital bed, spoke at the conference about “how to resolve the tension between acceptance and hope,” a task they had to try and figure out after Mark’s catastrophic spinal cord injury.

They talk about why “climbing into the raging river of grief when tragedy strikes can be the way to get to the next place”; and how they are now catalysing collaborations to cure paralysis in our lifetime.

Ted can make the quest to cure paralysis truly global

Only two Irish people have previously been invited to speak at the annual main Ted conference in Vancouver. Bono spoke at the 2007 conference, and mind magician Keith Barry in 2014. Ted Talks are promoted by a nonprofit which aims to spread ideas worldwide via short (18 minutes or less), powerful talks.

There are now many satellite Ted conference events worldwide, but the annual conference, which began in 1984, is seen as “at the heart of Ted”. At the five-day event over 70 speakers give 18-minute talks and shorter presentations.

Seen as a leader in resilience, innovation and collaboration, Pollock has spoken at Davos, EG, the World Economic Forum, Wired and F.ounders, as well as Ted. He co-founded the global running movement Run in the Dark, which will take place in 50 cities internationally this November, raising money to fund the Mark Pollock Trust.

Mark Pollock describes how their Ted contribution came about: “Chris Andersen, Ted’s curator was in the audience at one of my talks in Switzerland. That night we met and he spoke with Simone and I over dinner. A few weeks later he invited us to speak about our shared resilience at Ted2018. Ted can make the quest to cure paralysis truly global.”

Talking about their presentation, Simone George says “When Mark broke his back, I fell back on the personal tool kit I had at the time – go all the way in, research, learn as much as you can in a short period of time, and fiercely love every person around you that is trying to help, and even more fiercely love those who might get in the way. This is why I say in our Ted talk – science is love.

Science is an act of creation fuelled by the desire for human progress and care. There is no insurmountable reason why people should remain paralysed after spinal cord injury.”

George, a human rights lawyer and activist as well as a consultant commercial litigator, described herself as a “paralysis cure hunter”. When Pollock broke his back, her research was the start of their work to find and connect people around the world to fast-track a cure for paralysis.

Some 2,000 people attended the Ted conference this year, and in the audience for Pollock and George’s speech were environmentalist and former US vice president Al Gore, film director Stephen Spielberg, actor and activist Tracee Ellis Ross, rock star Amanda Palmer, anti-bullying activist Monica Lewinsky and social scientist Amy Cuddy. Cuddy, whose Ted talk about body language has had over 47 million views, described Pollock and George’s talk as “the most powerful, moving talk I have ever seen at Ted”. Ted curator Helen Walters described their talk as a “love letter to science”.