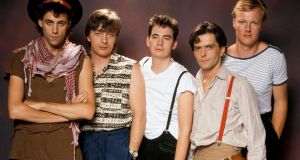 My gang: The Boomtown Rats. I can vividly recall watching the band performing Lookin’ After Number One on The Late Late Show in 1977. Photograph: Fin Costello/Redferns

I miss mixtapes sometimes. I devoted years of my life to making them for myself and for girls who, I imagined, would surely fall in love with me after getting artfully designed cassette boxes containing taped recordings of random songs I’d heard, first on Larry Gogan and later on Dave Fanning’s late-evening radio show.

I was happy to ignore the dire warnings on records telling me “home taping was killing music” as I pirated my way through my teens and 20s. Girls rarely fell in love with me but I carried on just the same.

I don’t make them now – obviously. Who has the time for that in a Spotified world? But I still make mixtapes in my head. Sometimes when I’m smugly weaving through traffic snarl-ups on a City Bike, swearing inexplicably at taxi drivers, I put together the soundtrack of my life, listing the songs that would feature were I to merit a movie.

Now, I don’t for a second think I do now – or will ever – merit a movie. I’m realistic and recognise that if there were to be an All The President’s Men or Spotlight style film made with The Irish Times at its heart, there’d be no speaking role for me. If I featured at all, I’d be an extra caught spilling boiling coffee over his keyboard and then onto his lap in the background while the key players played out some taut and tense drama in the foreground.

Or perhaps the cameras would catch a glimpse of me with a tear trickling down my face as I read a critique of my worth as a human being posted by an anonymous troll with 11 Twitter followers and a Call of Duty Avatar.

The point is, I’ll not be starring in the movie and there will be no soundtrack. But that hasn’t stopped stop me working on it. And I’ve even built an ever-growing Spotify playlist of the songs in the key of my life. Right now there are 301 songs on the list.

It’s a game you can play too. There’s just one simple requirement for inclusion on the soundtrack. If a song has made an impact, it’s on. It doesn’t matter if you like it or hate it or if it is cool or uncool or if – in the normal course of events – you would never listen to it. All that matters is that it can transport you back to a moment in time that mattered.

The Boomtown Rats’ Lookin’ After Number One features early on for me, because I can vividly recall watching the band performing it on The Late Late Show in 1977 and being as thrilled by what I saw as my grandmother was horrified.

I’d like to say it was the first record I cared about but it wasn’t – it was the second. Years earlier, when struggling to come to terms with the demands junior infants was making on my time, I was obsessed by I’m The Leader of The Gang (I Am) by – deep sigh – Gary Glitter.

I was so in thrall to him that I pestered my grandmother – who was handy with a sewing machine – to make me a silver suit like his. How different my life might have been had she agreed. So he’s on the list. And yes, that is awkward when it plays at dinner parties.

It’s not the only awkward moment on a playlist which sees Johnny Logan sit uncomfortably alongside David Bowie while the Velvet Underground and Nirvana fight with Bagatelle for my attention. Camper Van Beethoven take the skinheads bowling while Toasted Heretic wish they could write a song as perfect as that. Cyndi Lauper, a musician I’ve never cared for, merits not one but two songs. Time After Time makes the cut because it was playing when I finally mustered up the courage to ask that French exchange student to dance at a Salthill tennis club disco. My courage didn’t extend to talking to her as we did our circular slow set shuffle, so I never knew her name. I’m pretty sure I’m not on her list.

Fast-forward more than 30 years and there was Cyndi again, singing True Colours on the radio as I drove in the half-light of a December morning back to the Rotunda, to my infinitely better half and my little girl who had unexpectedly arrived in our world hours earlier. My slightly less little girls sing Ed Sheeran to me (well, I sing him to them, if truth be told) so he is on the list too. And more than once. So is Shakira.