Was Meghan and Harry's baby conceived in Dublin?

Hilary Fannin: Naming a child is an onerous responsibility but Drumondrina has a nice ring to it

Kensington Palace has announced that Meghan Markle, the Duchess of Sussex is expecting a baby in the spring of 2019. Video: Reuters 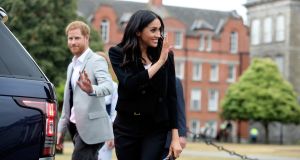 Prince Harry and Meghan Markle at Trinity College Dublin during their visit in July. Photograph: Maxwellphotography.ie

Unless you’ve been saturation diving in the North Aral Sea with a stray blobfish and a Beano annual for company, you’ll have heard the speculation that Meghan Sparkle and Prince Hairy may have conceived their first child during their “mini-moon”, a spindle-heeled royal visit to Dublin last July. (Surely you remember those halcyon days of summer when the couple touched down, all bright and shiny and full of joie-de-£500-million-granny?)

The handsome pair’s itinerary included a meet-and-greet with the presidential hounds (both of whom, incidentally, bark bilingually), after which the crappy hupple – sorry, I mean happy couple – attended a garden party where they mingled with hand-picked representatives from the worlds of sport, culture and the arts, which basically boils down to Brian O’Driscoll and Amy Huberman.

The next day, the newlyweds had hake and mash for their dinner in a nice bar on Camden Street. And somewhere along the way (though probably not on the back seat of a mint-green Cortina near the banks of the Royal Canal), they just may have found 10 minutes to, you know . . .

So, on the basis that Brooklyn Beckham was, by all accounts, conceived in Brooklyn and, em, and . . . hang on, I’ve already run out of examples (unless, em, Romeo Beckham was conceived in a sports car parked outside a Sicilian chip shop?), speculation has been rife that Harry and Meghan might consider commemorating their romantic Dublin sojourn through their choice of name for the new royal snapper.

Maybe Beaumontia or Finglasio or Drumcondrina or Red-Cow-Roundaboutio? Or maybe Phoenix (after the park and also to celebrate the young royals’ part in dragging the family firm out of the ashes)?

It’s an onerous responsibility, naming children. Quite often, you’re asking them to wear the badge of your rash, hormonally charged decision-making every day for the rest of their lives, or else you’re saddling them with dusty monikers that have been hanging around the family for generations like a pair of ornamental bellows. Many of us, myself included, unconsciously follow the trends and then find our kids falling over other Emmas and Ellies and Lauras and Katies and Jameses and Jakes and Jacks as soon as they hit playschool.

If you’re an actor, a rock’n’roll star or were ever even briefly in a boyband, however, you’re more likely to bequeath your beloved progeny with names that will try the patience of just about every mortal they meet in their enchanted lives. (“Just step this way please, Tickety Memphis Boo, and take a seat next to Elvis Waterlily here. We’ll be with you both in a moment to customise your robo-puppies.”)

Maybe, given Princess Sparkle’s relative youth and apparent smattering of egalitarianism, she may be inclined to be more sympathetic to the growing cohort of people who advocate for a more gender-neutral society, a world whose pronouns are less tyrannical. Carter, Avery, Jayden, Madison, Ryan and Reilly are just a few of the currently popular names that are not gender-specific, along with the fashionable elemental ones, such as North and West and Winter and Summer and Storm and Sky and Moon.

(Funny, isn’t it, how we anthropomorphise our storms and hurricanes, our increasingly common and destructive “weather events”, by christening them Callum and Bronagh and Deirdre and Niamh, and then attempt to neutralise or appease the unpredictable natural world by calling our fragile children after earth, wind and fire?)

Anyway, I sat outside the cafe in my local park recently, on one of those crisp autumn days we’ve been having, watching skinny-latte-drinking mothers loosely corralling small toddlers who were crashing around on big scooters, and momentarily I thought I’d wandered into a weather forecast. (“Winter, if you don’t play nicely with Rain, we’re going home in the Scirocco!”)

I began to wonder what had happened to Mary. Where are all the Marys gone, I asked myself, as all the little Oceans and Waves played around my feet, whacking into the table and spilling the coffee. Marys wouldn’t have dared not to play nicely I thought (not in public anyway). I remember a time when there was a Mary lurking behind every corner. Mary – a fine, solid and very occasionally gender-flexible name, long overdue a revival.

I wonder what the odds are of Harry and Meghan calling their child Mary? There are a few royal precedents after all. Maybe I’ll nick River’s wheels and scoot down to the local bookies; you never know when you might get lucky.

Shame-free sex education: It’s So Amazing! And only a little bit mortifying
5

‘I’d like to start my own business in Ireland, but not by the back door’
6

Authentic and walk-in ready in Kilmainham for €625k
7