Jennifer O’Connell: That's the paradox of becoming a parent 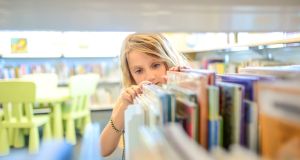 Judy Blume’s “Are You There, God? It’s Me, Margaret” was deliciously illicit, bold enough to give the nuns in our convent primary school an instant coronary

If I ever get asked about the book that most affected me, I’ll probably say Wuthering Heights, or Sebastian Faulk’s Birdsong, or Catcher in the Rye. But none of that is true. The book that had the most profound influence on me was Judy Blume’s Are You There, God? It’s Me, Margaret.

I borrowed it from the home of a friend who was away at boarding school. Her beautiful mother, an ardent supporter of books and women, used to frequently invite me to raid her daughter’s bookshelves. I smuggled it home like literary contraband, sandwiched between an Enid Blyton and the Lion, The Witch and the Wardrobe. (Sorry, E: I’ll give them all back soon.)

The thing we all knew about Are You There, God? It’s Me, Margaret was that it was a dirty book

Everyone in my class at school knew about it, and we spent ages figuring where we could get a copy, without our mothers finding out. Obviously, you couldn’t just walk into a bookshop and buy it. The thing we all knew about Are You There, God? It’s Me, Margaret was that it was a dirty book. It wasn’t as dirty as, say, Forever, which was rumoured to feature actual sex. But it was still deliciously illicit, bold enough to give the nuns in our convent primary school an instant coronary, since it was full of things nuns couldn’t possibly know about, like periods and kissing.

I found out years later that my sometimes disappointingly liberal mother not only knew I was reading it, but she approved. She approved so much that, years later, she bought a copy for my niece. If I’d know that when I was 12, it would have ruined it for me; part of the joy of Judy Blume was that it always felt exactly like she was talking to you, about you, for you, and telling you all the things other adults wouldn’t. AYTGIMM featured lots of things I’d yet to encounter, and some I never would – I still don’t know what a sanitary belt is. But I read that book over and over again, clinging to it like a harness, tethering me to the cliff face as I abseiled into adolescence.

I hadn’t thought about it in years until I read last week that Blume, who is now 80, has finally relented and agreed to sell the film rights, an entire half-century after she wrote it. That’s right: Margaret was born in Blume’s imagination 50 years ago, and her story hit the book shelves for the first time in 1970. I’m as nervous about the prospect of a film as Blume must be, jittery at the thought of a book that was such a crucial part of my formation being put out there for an audience of Fortnite-loving, selfie-taking, professionally disdainful 12-year-olds.

It was a world of rules made by important people in suits or dog collars; many of them, perplexingly, concerned with how to be a girl

Teenage girls all over the world loved Judy Blume, but to girls growing up in the Ireland of the 1980s, her books felt almost revolutionary. It’s hard to recall now – in this Ireland of marriage equality, and reproductive rights, and rights for trans people – but it was a strange, uptight place, that Ireland. It was a world of rules made by important people in suits or dog collars; many of them, perplexingly, concerned with how to be a girl. It was a world of tight whispers about what happened to those who didn’t follow them, and tragedies only ever hinted at. Kerry. Granard. A world of endless, dire warnings about sex, and how it was something boys would try to foist on you, and how it was your job, the most important job you’d ever have, to ward them off, not to lead them on, not to give them the wrong idea, so that they’d accidentally take advantage of you. That, we understood, was code for assault. Or rape. And if they did accidentally rape you, it would be your fault, because you didn’t stop it, you wore the wrong thing, you looked at them like that.

And then along came Judy Blume, and refused to join the chorus of shaming and blaming. No wonder we kept that book hidden.

My daughter is now 12. I want to give her a copy. I want her to read it and feel transformed. I might suggest we watch the movie together. That’s the paradox of becoming a parent: I used to want my parents to be shocked, now I want my daughter to be impressed. But it doesn’t work like that – literary contraband isn’t contraband if your mother hands it to you and begs you to love it. If she’s lucky, she’ll find her own Judy Blume, and she’ll hide it under her pillow, and it’ll be her secret, like Margaret was mine.

‘Moving overseas is daunting, but he took it in his stride’: An Irish woman walks for her dad
5

How to cook Christmas: Turkey and ham made easy
8