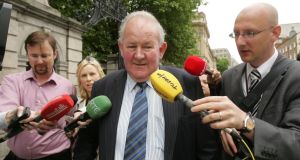 Seymour Crawford played a “crucial role” on the British-Irish interparliamentary body during “one of the most important periods of the peace process,” Taoiseach Leo Varadkar said. Photograph: Alan Betson

Seymour Crawford, who has died aged 74, was a tall, burly man with a placid temperament and engaging personality. He represented the Cavan-Monaghan constituency from 1992 until his retirement in 2011.

Earlier, he had learned his politics as a Fine Gael member of Monaghan County Council and at the local branch of the Irish Farmers’ Association.

At any Fine Gael or interparty political gathering in crowded hotel and conference rooms, Crawford, always neatly dressed in a suit and tie, stood out unmistakably, as “a countryman”, in the words of the Monaghan-born poet Patrick Kavanagh.

In 2004 he served as vice-chair of the British-Irish Parliamentary Assembly, of which he was a member for 14 years. His ability to socialise and talk the language of Europe’s common agricultural policy endeared him to Tory land-owning MPs from the English shires on the interparliamentary body, established under the 1985 Anglo-Ireland Agreement by taoiseach Garret FitzGerald.

From the Drumkeen, Aghabog, district of Co Monaghan, he was educated at Clones High School, situated on the Ulster side of a Border embedded in the Republic but geographically contingent to the more vocal six Ulster counties claiming allegiance to Britain. Growing up on a dairy farm, he was a man of the soil, familiar from boyhood to the farming world so vividly described in the writings of the novelist Patrick McCabe.

Before the old Monaghan constituency was merged as a five-seater with neighbouring Cavan, there was a core Fine Gael vote there, which Crawford cultivated.

At election time he was always up against stiff opposition from Fianna Fáil stalwarts including John Wilson and Rory O’Hanlon. The constituency also saw the hardworking Caoimhghín Ó Caoláin consolidating a safe niche for Sinn Féin.

Like most rural deputies, Crawford enjoyed a libation and convivial company on Thursdays in hostelries close to the Dáil such as Buswells and Powers on Thursday evenings before their Friday return to their constituencies. A devotee of John Bunyan’s Pilgrim’s Progress, he was a member of the evangelical Gideon Bible Society, and would end a long parliamentary day reading its Bible, stored discreetly in a bedside hotel drawer.

On hearing of his death, President Michael D Higgins praised Crawford as “a staunch representative of Monaghan values, of its culture and traditions”.

Minister for Business Heather Humphreys, his protégé and successor, said: “Anybody who knew Seymour will know that he was a gentle giant. He was extremely good-natured and he would always go above and beyond in his efforts to help his constituents.”

Former taoiseach John Bruton praised his deep interest in agriculture and how he “brought into politics the practical approach he had learned as a farmer”.

Addressing a service of thanksgiving at Newbliss Presbyterian Church, the Rev David Nesbitt described the politician as a big man in stature and in heart, in his interests and commitments, and generosity. Mr Nesbitt also highlighted Crawford’s deep interest in cross-Border structures and his work in advancing North/South understanding, trust and reconciliation.

Retired Catholic priest Fr Seán Nolan read the second lesson, on the beatitudes, with its famous passage: “Blessed are the peacemakers.”

The Rev Colin Anderson described Crawford as a peacemaker, and urged mourners to follow his very humble life. “This is a small island, divided by an invisible border; but an island that is still troubled, so let peace prevail and work hard for peace.” His humility, he added, contrasted with “the narcissistic and self-centred me, me, me culture prevalent in society”. But, “to blame our politicians for the epidemic is misguided”.

The Taoiseach paid a private visit to Crawford’s house and among the other callers at the wake were former taoiseach Enda Kenny and Minister for Justice Charlie Flanagan.

He is survived by his nephews, Andrew and Alistair and niece Kirsten.