‘I’m a bit of douchebag when it comes to dessert’ 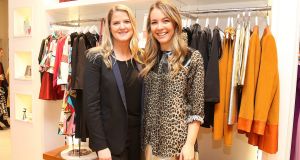 Emma: In the car earlier. It’s been a long year getting to this point.

Emma: And pregnant, so I can blame it on my hormones a little bit.

Jenny: I cry at sad family events. Last month we lost somebody.

Emma: My husband’s birthday present a couple of weeks ago. He’s a beardy man, so bought him a wooden beard comb by an Irish designer. Look, I got him other stuff too, okay?

Jenny: Something for my mum but I can’t remember what it was!

Emma: I’m going to say Cuil Aodha in Cork. It’s my husband’s homeplace, a Gaeltacht area, a rural community. It’s where we go for R and R, long walks, hot whiskeys in the local pub, everything you want and need when you live in the city to recharge the batteries.

Jenny: For me if it’s in Ireland, it’s Dingle. There’s something about being in a pub-stroke-hardware shop that makes me smile. Otherwise, anywhere in Italy. Red wine and Italian accents make me happy, and the rapid fire chatter. I feel really happy there.

Jenny: I had a pair of men’s Levi’s 501s, with the classic button fly. We covered them with bubble paint and neon paint and wrote U2 and the Violent Femmes all over them, hearts and teenage stuff. I thought I was the coolest person ever.

Emma: Anything from my sister Sarah’s wardrobe. She was my fashion icon and still is. I used to rob her clothes all the time. She’s six foot tall so there were some fitting issues! I used to pretend her clothes were mine. She got me my fashion reputation as teenager, which I’m very thankful for.

Emma: I’m a bit of douchebag when it comes to dessert. I’m allergic to gluten and rice, so raw desserts are my thing. Key lime pie with avocados and ground almonds.

Emma: And you can eat the leftovers for breakfast.

Jenny: Not proficiently. My love of music comes from a total admiration of people who have the gift. I don’t have the gift. I studied piano, learned the guitar, played ukulele, did choir, but I’m basically tone deaf. People think that DJs or music journalists are just failed musicians, but I never got to start! I’m in awe of people who can sing, write songs, play instruments, I was always a fan girl.

Emma: I dabbled as a kid. I went through a very lengthy Van Morrison phase. I got a harmonica and everything. But I don’t have the patience, I’ll leave that to the experts.

Jenny: I was in a car accident when I was 16. Typical story, girls in the back, guy in the front driving and showing off, and then rolling the car. Waking up upside down in a ditch was very scary. But I was very, very lucky, all I had was scratches and glass in my face.

Emma: When I was about four I had a blood disease where your veins become porous and your blood escapes. You get this mottled look all over your body. My doctor happened to recognise it and they gave me home care so I didn’t have to be put in a children’s hospital. I was laid out for months.

In your opinion, what’s the best TV show of all time?

Emma: I’m not a big TV buff. You know people who make movie references? I never get any of them. I don’t have a love for any one TV show, but I would watch anything that has got to do with making food. Come Dine With Me, real people who think they’re cooking great food but it’s sh*te.

Jenny: I loved M*A*S*H growing up for some reason. I always watched M*A*S*H and Three’s Company was my favourite as a little girl. My parents limited our TV viewing, but there was a science show called 3-2-1 Contact that I loved.

Emma: My mum used to flip the fuse on our TV all the time. She’d say she couldn’t afford to run the lights and the television at the same time, and would send us out into the garden or to draw.

What one thing would you like to do before the year is out?

Emma: It’s been a mad time for both of us with everything that’s going on. Rather than achieve more things, I kind of just want to achieve a bit of normality in my life and not be so all over the place, ticking as many boxes in a day as possible.

Jenny: I would like to have a regular routine, start jogging again, Pilates, just a little bit of downtime.

Emma Manley is a fashion designer, Jenny Huston is a jewellery designer. Along with Paul Haycock, they founded BLOSS, a winter capsule event at Dundrum Town Centre showcasing over 35 Irish designers, running until January 7th.