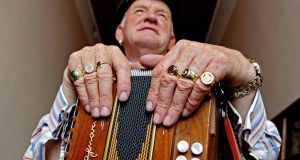 Patsy Dan Rodgers, who has died after a long illness, was King of Tory, Ireland’s most remote island, nine miles north of the Donegal coast.

Rodgers was an ambassador for and promoter of the island. In those roles, he developed a particular talent for befriending wealthy and influential individuals, and persuading them to take an interest in Tory.

He was the best-known of the current Tory school of primitive painters. This school developed since the 1950s. Rodgers exhibited in Ireland, but also in Scotland, England, the United States and France.

He was also an accordion player. As a musician, he was a performer, who could build a rapport with an audience with a gift for setting them dancing.

Rodgers was not a native of Tory. He was born Patrick Joseph Enright in Dublin in March 1944, and baptised in St Andrew’s Church, Westland Row. When four, he was fostered by a childless couple on the island: Domhnall Mag Ruaidhrí, a fisherman and small farmer, and his wife Bríd “Bidí Eoin Bhig’” (née Ní Fuaruisce).

He was one of a number of children fostered there in those years, Tory was a small and isolated community, with a population of about 260. The island priest was concerned that the islanders were too closely related, which might bring health problems.

Rodgers was never able to establish the circumstances of his birth. As a middle-aged man, he visited Dublin in an attempt to track down his parents, but the Church authorities were most unhelpful. Their attitude left him feeling broken.

When Rodgers was brought to the island, he could only speak English. However, the Tory of the 1940s was completely Irish-speaking. Bidí Eoin Bhig could speak no English at all, while his foster-father had some. Classes in the national school were entirely in Irish, and on his first day he felt lost and confused.

However, he soon learned Irish. Due to the isolation of Tory in those years, he forgot most of his English to the extent that his spoken English was quite poor for many years and he had to remaster it as a middle-aged man.

He left the island national school at 15 and went to work farming and fishing with his foster-father. By that time, Tory already had a school of primitive painters. At a young age he had befriended English artist Derek Hill, who regularly painted on Tory. He sketched from time to time. Then, in his mid-20s he put serious energy into painting. He followed the advice Hill gave him: “Whatever style you will have, it will be your own style and persevere with it.”

His flair for publicity made him the best-known figure of the current generation of Tory painters. He also had an eye for commercial opportunity. He was one of those who drove the establishment of a gallery on Tory, where island artists sell their work.

A generation ago, he became king of the island. When the former king died, his family agreed that Rodgers take the title. It was a ceremonial role, but he took it seriously. He used to greet ferries on arrival, shaking hands with visitors and saying “Welcome to my island.” It is fair to say some islanders were sceptical, but visitors appreciated the personal welcome.

As King, Rodgers was also an able spokesman for the community. In the early 1980s, there was an exodus to the mainland of almost half the population. It was possible the island would be abandoned. Rodgers was one of those who stayed. Over the years, he became a media performer, drawing attention in interviews to official neglect of Tory and pointing out the need for facilities. That was reflected in those who travelled long distances to attend his funeral.

He is survived by his wife, Caitlín: daughters Majella, Breda and Christina; and son Seán.