Fear of hair loss used to consume me. Now I don’t think it needs curing

Conor Pope: Shaving my head allowed me to tackle one of aging's obvious signs 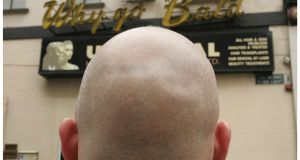 With no hair to grey or to lose my head is now much the same as it was 20 years ago. Photograph: Alan Betson

I’m being stalked by hair loss clinics. At virtually every online turn I’ve taken in recent weeks I’ve been confronted by ads for companies promising a cure for something I don’t think needs curing.

Normally Google is terrifyingly brilliant at reading my mind and listening to my conversations before targeting me with ads for things it thinks I’ll like, but its algorithms have been patchy of late and are directing me to surgical centres in eastern Europe which promise to move bits of my scalp from the back of my head to the front and sell me potions which will – they say – give me luscious hair.

Some of the sites – yes, I’ve visited them for research purposes – include testimonials from suddenly hirsute men. One said his eastern European adventure was “professional and stress free” and seemed moved by the transfers to and from the clinic. Another English gent expressed delight at the airport transfers and said the doctor “was treating me like a Rockstar and explain (sic) Every move she (sic) making!! I can’t say it enough I am Soooo happy whit (sic) how everything went & Love my new hairline !!!”

While I am – obviously – delighted his hairline is making this man with a weirdly poor command of his mother tongue “Soooo happy” it’s not for me. Hair is not something that has troubled me greatly since the early part of this century when I cut my losses and shaved my head in a Shannon hotel room on the night before I boarded an Aeroflot flight to Havana. But before that moment – which sounds more exotic than it was – it was a different story.

A fear of hair loss consumed me from the age of eight when I overheard my parents talking about a neighbour who had gone bald overnight after the authorities swooped on his house, built without the requisite planning permission and threatened to knock it. Despite an absence of major conveyancing issues on my horizon, the notion that such a thing could happen to anyone scared the eight-year-old me witless and I was convinced I’d wake up bald. I didn’t. At least not then.

In my early 20s, I developed what I told myself was a widow’s peak and comforted myself with the thought that James Dean had one. And Morrissey. And some bloke from Beverly Hills, 90210 whose name I never knew. Everything was grand until a hairdresser – the kind of man you’d imagine would relish spilling the beans on Santa to a small child – told me I’d not be making too many more visits to him thanks to my “girl’s hair on top”. I’m pretty sure that’s not a thing.

I didn’t know it at the time but by shaving my head, I was freezing myself in time

He was right though. With my 30s looming and my hairline more Jimmy Somerville than Jimmy Dean, I was forced to take stock of my options. They looked bleak. Since the dawn of time, baldness has been among the worst things that could befall a man – women have had a few more challenging things to contend with over the course of human history but that’s another story.

The prophet Elisha took such a dim view of his own hair loss that he had bears slaughter 40 children who called him “baldy”. That seems harsh. Julius Caesar came, saw, conquered and then created the comb-over. He also wore a laurel wreath to cover his bald patch – like the way the Edge wears his hat.

The boundless fear of hair loss among the great and good has led to some terrible “cures”. Romans smeared chicken crap on their scalps while Hippocrates, swore an oath when the pee from the same bird failed to re-grow his hair. Egyptians went for the fat of lions and tigers and bears. Oh my.

Nothing ever worked and all these and more cures were tried and rejected by the time my turn came. For me, sprays were on the table but a self-styled wonder cure cost €50 a month and would have to be applied morning and night for the rest of my life, for the sake of some light downy growth which sounded gross.

There were hormonal tablets but the side affects sounded terrifying. Hair transplant surgery was out because of the cost and the patchy results while wigs and toupees were discounted because of the mountain of abuse that would have been heaped upon my shoulders by unkind colleagues had I suddenly arrived in work on a Monday morning sporting hair belonging to someone else.

So I took a razor to what was left of my hair and saved it the bother of leaving me. I was lucky and made the decision at the perfect time just after a skin head stopped being the preserve of racist National Front members and Right Said Fred. And I didn’t know it at the time but by shaving my head, I was freezing myself in time and tackling one of the main signs of aging in men their 30s and 40s – wait for it – head on. With no hair to grey or to lose my head is now much the same as it was 20 years ago. Now, if only there was something I could do about the wrinkles.

Covid’s silver lining: How Ireland has fallen headlong in love with its pets
Real news has value SUBSCRIBE