Megxit ‘bombshell’: Why Meghan and Harry are right to strike back at the royal machine 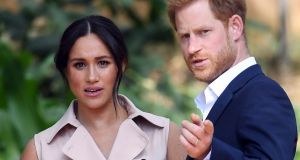 The gong for best front page on Megxit – the “bombshell” news of Harry and Meghan’s decision to step down as senior royals, curtail the time they spend in Britain, become financially independent, and renegotiate their terms of engagement with the press – goes to a US newspaper, the New York Post.

Under the headline “Harry and Meghan leave royals for ‘commoner’ life’”, the Murdoch-owned tabloid offers a vivid interpretation of what this “commoner” life might look like: Markle on a sofa with a fag in one hand and curlers in her hair; Harry beside her, belly hanging out over white Y-fronts, and own-brand beer spilling down his chest.

The bombshell, of course, isn’t that Harry and Meghan got fed up being part of the UK’s dysfunctional royal machine. It isn’t that Meghan Markle tired of living in a country where she was relentlessly criticised by the press – often in language that carried racist undertones – for everything from enjoying avocado on toast (“a favourite snack that fuels drought and murder”, as the Mail put it); through the way she held her bump or even, later, her baby; to having a drink with Piers Morgan and then having the gall to not invite him to her wedding. (To be fair, this final rebuke came exclusively and with tedious frequency from Morgan, who took to Twitter the morning after the announcement to declare the pair “the two most spoiled brats in royal history”.)

No, the shock is not that they’ve had enough. It’s that they have done something about it. In a unique twist on the Disney-approved version, the princess has swooped in and freed the prince from his tower.

Last year I wrote that Harry and Meghan were caught in a Sisyphean cycle of simultaneously courting and resenting public attention, and seemed naively convinced that the terms of engagement were theirs to dictate. It was, I said then, a battle that they couldn’t possibly win.

But I was wrong. It seems they can win. By handing in their “senior” badges to the Firm, turning off the tap of taxpayer funding and consciously uncoupling from Harry’s family, the couple have, in one brilliant, carefully calculated swoop, sidestepped accusations of hypocrisy and ensured that the terms of engagement are now theirs to dictate.

The split was announced, as they tend to be these days, in an Instagram post, issued without consultation with Queen Elizabeth, Charles or William, and brilliantly timed to come just after “divorce day”, the most popular date in the global calendar for divorces to be filed.

“After many months of reflection and internal discussions, we have chosen to make a transition this year in starting to carve out a progressive new role within this institution. We intend to step back as ‘senior’ members of the Royal Family and work to become financially independent, while continuing to fully support Her Majesty The Queen. It is with your encouragement, particularly over the last few years, that we feel prepared to make this adjustment. We now plan to balance our time between the United Kingdom and North America, continuing to honour our duty to The Queen, the Commonwealth, and our patronages. This geographic balance will enable us to raise our son with an appreciation for the royal tradition into which he was born, while also providing our family with the space to focus on the next chapter, including the launch of our new charitable entity. We look forward to sharing the full details of this exciting next step in due course, as we continue to collaborate with Her Majesty The Queen, The Prince of Wales, The Duke of Cambridge and all relevant parties. Until then, please accept our deepest thanks for your continued support.” - The Duke and Duchess of Sussex For more information, please visit sussexroyal.com (link in bio) Image © PA

“After many months of reflection and internal discussions, we have chosen to make a transition this year to carve out a progressive new role within this institution,” they wrote. “We intend to step back as ‘senior’ members of the Royal Family and work to become financially independent, while continuing to fully support Her Majesty The Queen.”

Queen Elizabeth is said to have been “hurt”, “deeply disappointed” and/or “baffled” by their decision, for which they seem to have asked neither permission nor forgiveness. Charles and William are reportedly livid. A terse, loaded statement was hurried out by Buckingham Palace, to the effect that: “Discussions with The Duke and Duchess of Sussex are at an early stage. We understand their desire to take a different approach, but these are complicated issues that will take time to work through.”

But how complicated is it really? Harry and Meghan have had enough. They’ve decided they’d rather forge their own way financially than continue to be tethered to a rigid, anachronistic organisation, embroiled in a game with a British media that they can only lose.

Their statement suggests they have given more thought to the process of disentangling themselves from the media than from the royal family itself, describing their vision for a “new media policy”. It explains how this policy will relate to the UK’s royal correspondents in terms that leave no doubt as to how Harry and Meghan feel about them. (TL;DR: they’re not fans.)

“Britain’s Royal Correspondents are regarded internationally as credible sources of both the work of members of The Royal Family as well as of their private lives. This misconception propels coverage that is often carried by other outlets around the world, amplifying frequent misreporting.”

As social media eagerly geared up for the prospect of Markle one day playing herself in The Crown, the reaction of professional royal correspondents to all of this was predictably less enthused.

The news that they are to be sidelined in favour of Instagram captions and interviews with “grassroots media organisations and young, up-and-coming journalists” was met a spectrum of emotions that ran from incandescence to dejected bafflement. “This charming, intelligent, beautiful woman hadn’t a clue what the monarchy really is, or what role minor members of the royal family have to play in public life,” tutted AN Wilson in the Daily Mail.

“Both seemed oblivious to the fact that the British monarchy is a delicate constitutional miracle, not a vehicle for its members to press home their views on the subjects that interest them, however noble.”

But what is so miraculous or delicate about an institution that allowed Prince Andrew free rein to pursue his own, very particular set of interests – namely, his seedy, morally questionable involvement with the child trafficker Jeffrey Epstein?

It was only when Andrew tripped over his own ego in an interview with the BBC’s Emily Maitlis – in which he seemed far more repulsed by the memory that he’d once been in a Pizza Express in Woking than he did at the notion of rich, middle-aged men having sex with trafficked teenagers – that his mother finally stood him down from his duties.

The response of another Murdoch organ, the Times of London, was less visibly gleeful than its US sister paper at the Megxit news. In an editorial, it said the announcement carried all the signs of the “petulance and hot-headedness for which Prince Harry is sadly becoming well-known”. A few months ago I might have agreed. But petulance means sulky and peevish. It’s not a term usually associated with this kind of cold, clinical action.

Meghan Markle has already taken steps to limit her interactions with certain dysfunctional branches of her own family. Is it really such a shock that the couple have now decided to begin a surgical excision of his?