Moral dilemmas posed on ‘Am I The A**hole’ Reddit forum often go viral, and with good reason 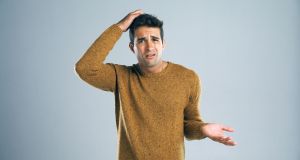 Chief among most people’s new year resolutions are to eat more healthily, move more stealthily and be a bit kinder to those around us. And if you’re resolving to be less of an a**hole in 2020, you’re in luck, because an online community is there to help you make that leap.

It’s a widely held belief that if you’re asking the question, you probably already know the answer. Yet this doesn’t stop people in their droves – and we’re often talking dyed-in-the-wool a**holes who have a**holedness baked into their bones – taking to the internet and asking people, “Am I The A**hole?” (AITA)

For the uninitiated, a quick intro: on Reddit.com, people take to a subreddit (online community) called AITA, where people relieve themselves of personal conundrums such as “Am I The A**hole for breaking up with him because of his job?” Or “AITA for not wanting to make my wife her favourite comfort food?” Or “AITA for now allowing my best friend to crash at my house after his wife died?” Or “Would I BTA if I asked my new boyfriend not to wear his mother’s ashes around his neck during sex?”

Among the group’s most enjoyable posts are the most mundane, from the man who orders jalapenos on his pizza so that his wife won’t eat it, to the guy who accused his bosses of gender discrimination after they told him he couldn’t wear crocs to work.

Nothing is off-limits for those who want to tease apart a recent conflict with strangers. And the results are oddly compelling. Even Chrissy Teigen can’t resist a lurk, tweeting earlier this year: “I have been reading the “I am the a**hole?” section of Reddit for truly...6 hours now”.

“This subreddit is here for the submitter to discover what everyone else thinks of the ethics or mores of a situation,” the site header warns. “It is not here to draw people into an argument you want to have, or to defend your position. If people start saying you were the a**hole, do not take that as an invitation to debate them on the subject… accept the judgment and move on.”

With around 1.2 million subscribers poring over 800 new posts a day, you can be assured that most of them will respond in the affirmative.

And, given that we live in a culture rife with online shaming and judgment, it doesn’t take much for these seemingly innocent questions to take flight from Reddit and go viral online.

In May this year, one man divided the internet after posting that he had called off his wedding because his fiancee almost killed his dog by accident.

“I’d rather be an a**hole now than spend years of my life worrying every time our child is left alone with her,” the 28-year-old admitted. “If she’d accidentally killed a person while texting and driving, I would also leave her.”

Two months previously, a woman shared a story about how a man she was seeing broke up with her after seeing her without her makeup on, receiving 2,000 comments (conclusion: she is very much not the a**hole).

In a post that migrated to and spread all over Twitter, another newlywed posted another head-scratcher: “AITA for kicking out a couple who brought their baby and toddler to my wedding because I wanted a child-free event?” It was only a matter of time before a spin-off podcast (aitapod.com) surfaced.

Unpacking the popularity of AITA is pretty easy. If you want to feel like you’re doing okay in life by comparison and are due north on your own moral compass, this site is definitely a good place to start.

The online world is a massive trigger for moral outrage. It stands to reason that an online community where people invite judgment would become catnip. The user is automatically in a position of moral superiority. Being put in the position of arbiter of right or wrong on a site that calls itself “a catharsis for the frustrated moral philosopher in all of us” – well, it’s way too good an opportunity for many to pass up.

And, as Barack Obama astutely observed last year, being judgmental online is a psychological shortcut to feeling as though you are part of some important conversations.

“I get a sense among certain young people on social media that the way of making change is to be as judgmental as possible about other people,” Obama said. “If I tweet or hashtag about how you didn’t do something right or used the wrong verb, then I can sit back and feel pretty good about myself because ‘Man did you see how woke I was? I called you out!’”

What’s fascinating about AITA is that the posters of these conundrums take the feedback from others, often negative, in their stride. Often, they’ll accept it without igniting a petty, “let’s agree to disagree” debate.

The group’s main rule is “accept the judgment”, and there aren’t too many outposts of the internet that take on this mantra. It’s an oasis in an otherwise madcap online world (especially on Reddit, which can veer towards the truly vile more often than not). On AITA, the a**holes in question vow to move forward, modify their behaviours and be nicer next time.

Aside from all that, AITA seemingly fills a spot in our collective consciousness that the problem pages of old used to occupy. It provides a scintillating insight into the challenges and tribulations of others. Its users are like modern-day agony auntd, except there are many more of them, and they’re more inclined to dispense tough love to help others lighten their conscience.

As one moderator astutely put it to Vice Magazine earlier this year: “People get really angry at the ‘a**holes’ here. I think it’s because people see times they were wronged reflected in these stories and react as though the ‘a**hole’ in the story has done harm to them personally. I wish that people were better at having empathy for everyone involved. Everyone is the a**hole at one time or another.”

If you’re wondering, incidentally, whether judging strangers for their perceived weaknesses and peccadilloes does indeed make you an a**hole, you know what to do.