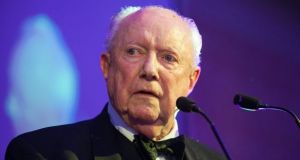 Barry O’Donnell, the noted paediatric surgeon, has died aged 93 after a professional career of great colour and diversity. He was the first trained paediatric surgeon to be appointed in Ireland, to Our Lady’s Children’s Hospital, Crumlin at the age of 29.

Despite an enormous clinical load, particularly when working on his own during his first nine years, he achieved a revered status as a clinician, teacher, mentor and researcher. He helped to establish the Children’s Research Centre in Crumlin Hospital in 1971, one of his proudest achievements. He became professor of paediatric surgery at the Royal College of Surgeons in Ireland in 1986.

O’Donnell also threw himself into what he preferred to call "medical affairs" rather than “medical politics”.

The fruits of his endeavours, which included many publications and three textbooks on paediatric surgery, were widely recognised and rewarded. He was invited to deliver lectures around the world. He was awarded the Hunterian Professorship to the Royal College of Surgeons of England and was also visiting professor to many universities in the United States, including twice to Harvard. He was also acknowledged with medals and fellowships of surgical and paediatric colleges and associations in countries as diverse as Malaysia, Singapore, South Africa and the United States.

In a parallel world, O’Donnell also threw himself into what he preferred to call “medical affairs” rather than “medical politics”. During the 1970s he worked on behalf of his colleagues with the Irish Medical Association in their contractual negotiations with the government. This led to his unique and singular, concurrent appointment to the presidencies of the Irish, British and Canadian Medical Associations in 1976. He also became chairman of the British Medical Journal from 1982 to 1988.

His sense of theatre and sharp wittedness was honed on the banter shared also with his mother and two brothers.

He had an enduring affection for the Royal College of Surgeons in Ireland to the end of his life. He was a member of its council for many years before becoming president in 1988. It was then that he set out to extend the college’s training remit to one that had a greater relevance to support surgeons and their patients in practice. For years, and at some personal cost, he railed against the number of small hospitals in Ireland whose facilities were inadequate to deliver the necessary care for the spectrum of emergencies that presented to them.

O’Donnell was as consummately Cork as the River Lee, drisheen, and perhaps tellingly, the Blarney stone. He was the son of Michael, the proprietor of the HI-B bar on Oliver Plunkett Street, and Kitty O’Donnell. It is said that his own personability came from his father while his sense of theatre and sharp wittedness was honed on the banter shared also with his mother and two brothers.

His education began at Christian Brothers, Cork, followed by Castleknock from where he went on to gain a medical degree from University College, Cork. He served his surgical apprenticeship in England over six years, culminating in an appointment at Great Ormond Street Hospital, London. In 1955, he won the Ainsworth Travelling Scholarship which took him to Boston, first to the Lahey Clinic, then the Floating Hospital for Infants and Children.

While the entree and main course of O’Donnell’s life had been more than ample up to this point, he tucked into his retirement with no less relish. He wrote the biography, Terence Millen – A Remarkable Surgeon, and an important historical compendium, Irish Surgeons and Surgery in the 20th Century. He was also a celebrated after-dinner speaker.

A great deal of his strength came from the support of his wife, Mary Leydon, who he married in 1959 and who he deservingly described as the “best decision of my life”. He felt her loss enormously when she died in 2015.

Rugby, golf and sailing preoccupied O’Donnell’s recreational time, such as it was. He had played rugby for UCC as a pugnacious hooker and remained a lifelong supporter of Munster rugby with a passion only matched by his antipathy for Leinster especially when drawn together. His love of sailing with his family and others brought them close to a premature finality during the notorious storm that that ravaged the Fastnet Race of 1979 and in which 21 people died.

In August this year, an RTÉ radio documentary recounted the story told by O’Donnell and others of how they foresook “the Rock” and limped their boat, disconsolately but relieved, into Rosslare. Meanwhile, in later years and at a more stately pace he golfed with a modest but deceptive skill at Portmarnock where he put up a nine-hole trophy for the over 80s. He remained sprightly in every way until illness took its toll for the last year or so.

He is survived by his children John, Catherine, Nicholas and Michael, his eight grandchildren, and his brother Brian.