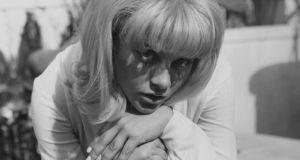 A much-celebrated movie poster shows Sue Lyon peering over a pair of heart-shaped sunglasses while sucking a red lollipop under the legend “How did they ever make a movie of Lolita?” The answer lay in the casting of 14-year-old Lyon in the title role of Stanley Kubrick’s film adaptation of the controversial Vladimir Nabokov novel, in which Lolita is 12 years old.

Although Kubrick later complained about having to stick to the Hollywood production code, he said of Lyon, who has died aged 73, “She’s a one-in-a-million find”, and Nabokov thought her “the perfect nymphet”, a noun he coined in his 1955 novel. Her performance in Lolita (1962), her first feature, won the Golden Globe for most promising newcomer. Few film actors can claim such a prestigious start to their careers.

Her first three pictures were directed by three cinema greats: Kubrick, John Huston (The Night of the Iguana, 1964) and John Ford (Seven Women, 1966). Unfortunately, from such heights there was nowhere else to go but down, and whatever she did, whether professional or personal, Lolita would be evoked without fail.

She was born Suellyn Lyon in Davenport, Iowa, the last of five children of Sue Karr Lyon, who worked as a hospital house mother. She was 10 months old when her father died. At 11, to help pay the bills, she got jobs as a model with the JC Penney agency, while still going to school in Los Angeles.

She soon got small parts in the television series Dennis the Menace and The Loretta Young Show (both 1959). It was after seeing her in the latter that Kubrick suggested that she audition for the part of Lolita, beating, as rumour has it, 800 other young women. “Even in the way she walked in for her interview, casually sat down, walked out, she was cool and non-giggly,” Kubrick recalled. “She was enigmatic . . . She could get people guessing about how much Lolita knew about life.”

It was just this quality that Lyon brought to her role – teasing Humbert Humbert (James Mason), the middle-aged British professor, sexually infatuated by her.

Lyon retained some of Lolita in The Night of the Iguana, among a group of Baptist teachers in Mexico. As the 16-year-old niece of the leader of the school, she seduces the tour guide, a defrocked priest (Richard Burton), or vice versa. “You’re as dangerous as you are young and lovely,” he tells her.

In contrast, in Ford’s final film, the underestimated Seven Women, Lyon brought an air of naivety to the role of the youngest in a group of Christian missionaries in rural China in 1935. There is a subtle implication that the head of the mission (Margaret Leighton) has more than a maternal interest in the young woman and is jealous of the fascination she holds for an atheist doctor from New York (Anne Bancroft). It was a performance that should have brought Lyon more laurels than it did.

Her first grown-up role came as the romantic interest in The Flim-Flam Man (1966), directed by Irvin Kershner. A less good performance might have slowed up the lively comedy in which she played an affluent woman, a potential victim of George C Scott and Michael Sarrazin as a couple of con men.

After making a few low-budget international thrillers and guest appearances in Police Story and Fantasy Island (both 1978), she retired from show business in 1980.

Lyon was married and divorced five times. Her husbands were the film-maker Hampton Fancher, Roland Harrison, a photographer and football coach, Gary Adamson, whom she married while he was in prison, Edward Weathers and, in 1985, Richard Rudman, a radio engineer; they divorced in 2002.

She is survived by Nona, her daughter from her second marriage.