How can Prince Andrew judge the Epstein interview a success?

Opinion: His TV ‘performance’ did not make the awful set of allegations disappear

Britain's Prince Andrew denied that he sweated heavily during an alleged night out with 17 year-old Virginia Roberts in 2001 as he didn't sweat at the time due to an "overdose of adrenaline in the Falklands War ". Video: BBC 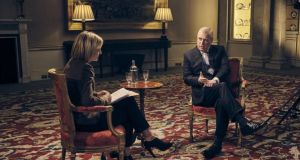 We’ve always had a hunch that the British royal family aren’t like us – how could you be if your mum or granny’s face was on all the banknotes? Yet this weekend cemented our suspicions that they really do exist in a different realm altogether.

While the media world has characterised Prince Andrew’s televised interview with Emily Maitlis not so much a car-crash as a graveyard of decimated Boeings, the prince himself has deemed the entire exercise a success.

As he was grilled on his friendship with serial sex offender/alleged trafficker Jeffrey Epstein, not to mention alleged encounters between the prince and one of Epstein’s 17-year-old charges, Prince Andrew made so many gaffes that it was hard to keep up.

Asked of his whereabouts during one of these supposed encounters, the prince countered that he was, at the very moment his accuser says it took place, at a children’s party at a Pizza Express in Woking. It was a very unusual place for him to be as a royal, he conceded, which is precisely why he remembered it.

Denying that it was he in a photo with teenager Virginia Roberts-Giuffre, his chubby fingers clasped around on her bare hip, he offered that he was “not one to, as it were, hug, and public displays of affection are not something that I do”. This from a man known back in the day as Randy Andy. Anyway.

As the missteps kept coming, so too did the internet memes. After mentioning that he was physically unable to sweat, owing to an adrenal condition he suffered during the Falklands War, social media was soon awash, as it were, with pictures of Prince Andrew “glowing” absolute buckets.

There was nary a lick of sympathy for Epstein’s victims as Prince Andrew strove desperately to draw a line under his friendship with Epstein. He noted, too, that he didn’t regret his relationship with the disgraced billionaire financier, as it had “seriously beneficial outcomes” for him.

It has been reported that, afterwards, Prince Andrew was so pleased with how the interview had gone that he gave the BBC production team a tour of the palace.

A palace source also told the Sun newspaper: “The Duke went to church with the Queen [on Sunday] and was heard telling her it’s all been a great success. He thinks he’s done the right thing and has put the criticism to rest. He was all smiles and was looking very buoyant and happy.”

Where to even begin with this level of disillusionment?

Still, at least Andrew will take the heat off Prince Charles, the late Princess Diana and Prince Harry, all of whom who have been roundly slated for catastrophic and ill-advised televised interviews.

Charles put his foot in it with his famous “whatever ‘In Love’ means” dismissal of his marriage to Diana. She in turn went one better by loading on the kohl eyeliner and the woebegone vibes for her “there were three of us in this marriage” interview for Panorama in 1995.

And more recently, Harry’s admission that he’s on a “different path” to his brother William is likely to have gone down as well as a bucket of corgi poo with the Royal household.

When will The Firm ever learn that media interviews, bouts of emotional diarrhoea, and attempts to seem normal (Pizza Express, chuh), only single them out as a different species?

A ten-minute chunder of platitudes on Christmas Day aside, Queen Elizabeth has stuck firm to her “never complain, never explain” code of conduct, and with good reason.

The minute the Royals open their mouths to answer an interviewer’s question – no matter how well briefed they are – they seep entitlement, weirdness and moral ineptitude.

Their mouths are making the right sounds, as it were, with one’s blue-blood eloquence, but we’ve yet to relate to any one of them.

There has been a creeping Kardashianisation within the younger ranks of the Royals, but perhaps they’d do well to look to Princess Anne, who undertook the most official engagements last year (518) of any of them and kept well clear of all the soapy goings on.

We probably prefer our royals to keep calm and carry on. They’re at their most tolerable when they are waving glacially from a palace balcony, when they’re not alluding to their inconceivable level of privilege.

And there is no media interview or television “performance” that can make a truly awful set of allegations, and a chronic series of misjudgments disappear - unless you can refute every allegation and make credible apologies for the misjudgments. Prince Andrew, by citing legal advice not to answer some questions, fell far short of this.

How he, or anyone in his circle, could judge the exercise a success, we shall probably never know.