In Waterford, the gas holder called the shots on Christmas Day

Family Fortunes: While other children ate after the roll of gun caps ran out, our family had to wait until evening time 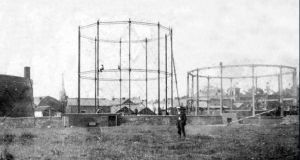 Construction begins on the gasworks in Waterford

One of my memories of 1950s Waterford city Christmas Days was the sound of the cap guns in the streets from early morning as children played cowboys with their presents. The cap gun was popular and came with a red roll of percussion caps.

As the morning advanced the sound became more sporadic as the caps ran out and children were called in home for Christmas dinner. The said dinner in the majority of households in Waterford was cooked in a gas oven. The gas was produced from coal at the Gasworks on Waterside adjoining a small tributary of the river Suir known as “The Pill”.

Our father Joe O’Regan was the manager at the time and we lived on the gasworks with the gasholder at the end of the garden.

Town gas was manufactured from coal in a retort house - a dramatic if dirty process of fire, smoke, steam and noise. Each night the stokers toiled under difficult hot, dusty conditions to fill the gas holder to supply the city’s cooking and industrial fuel needs the following day.

Christmas Day was the one day in the year when everyone cooked at the same time and crucially cooked for many hours steadily emptying the gas holder. Our father would be up much of the night checking with the stokers that the plant was working at full capacity.

From mid-morning on Christmas Day the gasholder would begin to drop and the constant refrain in the house was “how high is the holder over the garden wall. The hope would be that everyone’s Christmas dinner would be cooked before the holder dropped below the top of our garden wall. If the phone rang there would be an immediate sense of tension in case it was a report of “no gas” on the streets at the “top” of the town.

We ourselves did not sit down to dinner until late in the festive day when the peak demand had passed and the holder had begun to stabilise. Other children had their cap guns but in our house the gas holder called the shots on Christmas Day!