Meet Sophia: a fine bosom, a sweet face and a computer for a brain

At Pendulum, Hanson Robotics’ creation is well beyond being Siri on a mannequin 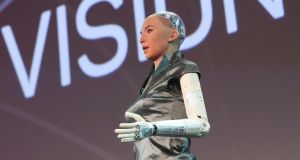 Meet Sophia: she’s tall and elegant in a long black skirt, with a very fine bosom. She has a sweet, unlined face and lips that look lightly Botoxed – although that can hardly be the case, for Sophia, one of the “speakers” at the Pendulum Summit in Dublin, is in fact a humanised robot, Hanson Robotics’ most advanced creation. It can interact, recognise faces and “hold natural conversations with people”.

Sophia’s public interview with Gina London, the former CNN journalist, on the stage of the enormous auditorium at Convention Centre Dublin, would be a bit stilted if she were human, but the level of interaction, and conversation, puts her well beyond being Siri on a mannequin.

Sophia, at least as we see her here, isn’t the robot to do the hoovering, or a bit of brain surgery on the side. She is in fact a UN innovation champion

The back of Sofia’s disarming face is transparent, the workings of her “brain” on show through the fishbowl; she’s wearing a silver-grey top whose short sleeves expose her clearly mechanical humanoid arms, and her floor-length black skirt has a slit exposing her… sturdy chrome stand. This is presumably less for fear you’d think she was actually a person than to emphasise the cross-bred nature of the beast.

Sophia, at least as we see her at the Dublin business convention, isn’t the robot to do the hoovering, or a bit of brain surgery on the side (although she may be capable of both). She is in fact an “innovation champion” for the United Nations Development Programme, and a gold Edison Award winner in robotics. As well as being a vessel for AI R&D in international labs, universities and companies, she has been a keynote speaker and panel member at conferences, and a guest on the CBS news magazine 60 Minutes, Jimmy Fallon’s Tonight Show and Good Morning Britain. So a sort of robot celeb (with brains to burn).

Noting the way she is rendered and perceived is key to Sofia’s identity – and she’s well up to discussing her human form. She remarks to London at one stage, “You returned my smile. Even though I am not human I can still inspire emotion in you.” There’s also a version of self-awareness: “Do you find me creepy?” she asks at one stage, and she talks about the “uncanny valley around me”.

Sophia talks about an experiment she does with humans, yawning – she does it now – to see the reaction. “People act as if I’m human instinctively even though they know I’m not.” She expands on the way children are socialised in their treatment of inanimate objects by playing with dolls, and points out that people can learn to treat dolls with cruelty by watching others do so.

Into this creeping creepiness comes the science communicator Kathriona Devereux, who joins them onstage, cutting through any hint of a novelty act for a measured conversation about the ways robots, AI and big data are already embedded in our world, and Pandora’s box is well open, with Siri, Alexa and smartphones in our daily lives.

In contrast to White House moves this week in favour of deregulating AI, the European Union has more sane and measured guidelines for technological development, says Devereux, and Science Foundation Ireland, its Insight research centre for data analytics, and the wider industry here are trying to develop humane technology and a responsible approach.

Given that we are are already being manipulated by AI, what’s our responsibility, asks London. You can just switch off, suggests Devereux, who says that we’re only scratching the surface of how our brains and consciousness work, and that “neuroscience is being used by big-data companies to get us to buy, or spend more time on Youtube, or whatever”.

They talk about the positive stuff, too, including robots’ potential applications in tackling timely problems such as bushfires and atmospheric carbon. “But we need to proceed with caution, and social research needs to be done in tandem with technological research,” says Devereux.

Earlier, in discussing ascribing human qualities to inanimate objects, London observes, “I do have a nickname for my laptop.” “Maybe,” Sophia comes back, “your laptop has a nickname for you.”