Meghan Markle shock: Stilettos aside, she looks like a woman who’s just had a baby

Britain's Prince Harry and his wife Meghan held a photo call to introduce their son Archie Harrison Mountbatten-Windsor to the world. Video: Reuters 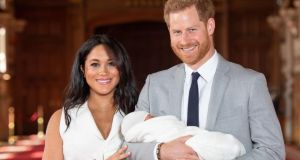 And so it came to pass. Archie Harrison Mountbatten-Windsor, the newest British royal baby, was shown off this afternoon at Windsor Castle.

As her husband, Prince Harry, held their two-day-old child, Meghan Markle, the duchess of Sussex, said: “It’s magic. It’s pretty amazing. I have the two best guys in the world, so I’m really happy. He has the sweetest temperament. He’s really calm.” They both laughed, and Harry said: “I don’t know who he gets that from.” Meghan said: “He’s just been the dream, so it’s been a special couple of days.”

Meghan looked beautiful and quite natural, her hair loose and flowing. Refreshingly, she also looked and moved like someone who could have given birth a couple of days ago: there’s no hiding her postbirth bump. Harry carried their new baby, and she put a protective arm around them both as they left, a nice signal for the future.

Many women who have given birth must have winced as they watched Meghan Markle walk down St George's Hall. Thankfully the poor woman didn’t fall over

Disappointingly, we saw little of the tiny baby, who was swaddled in white, with a little white hat. When the photographers asked for a look, Baby Sussex’s protective father tilted him slightly towards the camera. (“He’s already got a little bit of facial hair as well – wonderful,” Harry joked.)

Meghan too wore white – a shirt dress – and Harry was in a light-grey suit.

Startlingly, Meghan wore stiletto heels. This was unexpected, given that she reportedly felt sorry for her sister-in-law Kate after the duchess of Cambridge’s postpartum parading of perfect grooming – a brood mare, all high heels and make-up – as she left hospital just hours after giving birth.

The Duke and Duchess of Sussex are pleased to announce they have named their first born child: Archie Harrison Mountbatten-Windsor This afternoon Their Royal Highnesses introduced Her Majesty The Queen to her eighth great-grandchild at Windsor Castle. The Duke of Edinburgh and The Duchess’ mother were also present for this special occasion. Photo credit: Chris Allerton ©️SussexRoyal

Beforehand it was thought that Meghan, who seems to be her own woman, didn’t want the fuss of having to dress up so much. (This was according to a “friend” of the 37-year-old who spoke to the red tops.)

Despite the stilettos, someone at the castle thought it a good idea to have Meghan and Harry walk a pretty long way down St George’s Hall to meet the waiting press, the cameras filming all the while. Many women who have given birth must have winced as they watched. Thankfully the poor woman didn’t fall over, and she had her husband to hold on to for the excruciatingly long walk.

The questions were as expected. Who does the baby take after? “We’re still trying to figure that out,” Meghan said. How has Harry found parenting? “It’s great. Parenting is amazing... We’re just so thrilled to have our own little bundle of joy.” Meghan said: “Thank you, everybody, for all the well wishes and kindness. It just means so much.” And then they walked back up the hall, slowly, as the world (well, some of it) watched.

Some facts. The Sussexes’ son, whose name has just been revealed as Archie Harrison Mountbatten-Windsor, weighed 7lb 3oz (3.2kg) when he was born, at 5.26am on Monday, an event for which Harry was present. The newborn is Queen Elizabeth’s eighth great-grandchild and is seventh in line to the British throne (behind the prince of Wales, the duke of Cambridge and his children – Prince George, Princess Charlotte and Prince Louis – and Prince Harry). Grandad Charles was away in Germany with his wife, Camilla; Harry is expected on a royal visit to the Netherlands this week.

Previous royal-baby parades, after an experience that is painful and bloody and exhilarating, have set alarmingly bad examples. Meghan’s look was more honest and natural

As the baby presentation neared, Piers Morgan had been bleating, making what he described himself, in retracting them, as needlessly churlish comments. Mind you, the former News of the World editor continued to dig himself in, complaining today on Good Morning Britain, the TV show he presents, about Meghan “ghosting” him and joking about the chances of Meghan and Harry naming their newborn Piers to make it up to him.

His cohost Susanna Reid had to say: “Just because you went out for a drink, she didn’t have to become your best friend. You need to let that go.”

Morgan sounded a bit like Alan Partridge sniping at his pained cohost, Jennie, on This Time, only that was comedy. Mind you, putting Morgan through simulated childbirth pain on the programme today, to stop him going on about how it isn’t a big deal, was an inspired idea, and pretty funny.

And far be it from us to set any store by what Morgan thinks, but it is true that the British public fund their royal family handsomely, and expect their pound of flesh with its new arrivals in return. (Thankfully the rest of the world gets the royal soap opera free.)

And of course there are (probably) real people and real lives behind the family’s public front. (Who could not be happy at a baby’s safe birth to joyful parents?) But the real value of Archie’s arrival for Britain’s commoners could be in setting an example. Announcing the birth a couple of days ago, a beaming Harry said: “It’s been the most amazing experience I could ever have possibly imagined. How any woman does what they do is beyond comprehension.”