Sea change: Upcycling the treasures of the ocean

Siblings Chris and Lynn Haughton are combining their commitment to ethical and sustainable design, and their love for the sea, to create a special art workshop for children 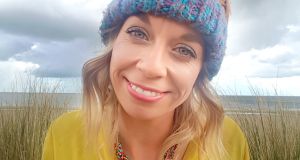 Lynn Haughton: ‘The most sustainable resources are the ones we have.’

Growing up in Killiney in south Co Dublin, siblings Chris and Lynn Haughton’s father was always building things: from doll’s houses for Lynn, to whole new rooms for their two-bedroom house. “He was a really resourceful person,” Lynn explains. “Whenever I wanted or needed something, he would find something in the shed and come up with a genius idea, where he could make it from what he had available to him. He always seemed to see the potential for what else things could be.”

Neither Chris nor Lynn could have imagined then how the trajectory of their careers would be influenced by their father’s entrepreneurial inventiveness. Picture-book maker Chris has dabbled in everything from graphic design to rug-making, while designer Lynn has applied her skills to interiors, fashion and environmental industries.

As the older sibling, Chris inadvertently set a creative and entrepreneurial template for Lynn to follow. After graduating with a degree in graphic design from NCAD in the early 2000s, he moved to London to work as a freelance illustrator. “I was basically doing anything that people asked me do,” he explains, “mostly illustrations for advertising and graphic design. I enjoyed it but it was hard, and I eventually felt that I wanted to do more things for myself.”

He started making picture-books, and his first, A Bit Lost, was published to great acclaim in 2010.

Volunteering with the Fairtrade fashion retailer People Tree in his spare time, Chris was inspired to marry his own entrepreneurial instincts with more ethically driven work; something that could be “mutually beneficial” to those involved in bringing life to his designs.

He had spent his 20s travelling throughout India and Asia, and it was while living in Nepal in 2010 that he began designing rugs, which he got made at one of the oldest Fairtrade workshops in Nepal.

“The story behind that workshop was fascinating,” Chris says. “The man was from a family who were from the lowest caste in Nepal. Their family trade was to clear out manure and animal remains, but the grandfather decided to set up a fertilising company using all the remains he was disposing of. He became very wealthy, but he set up a carpet workshop to help other people out of poverty.”

When Chris moved back to London, he continued to design rugs, and established NODE, a Fairtrade network for connecting designers with carpet makers in Nepal.

Meanwhile, his foray into picture-book making was taking off, with Oh No George! (2012), Ssh! We Have a Plan (2014), and Goodnight Everyone (2016) establishing him as a staple of children’s storytime around the world. With their striking colour palettes and large-eyed, oblong characters, the books appealed both to young readers and their adult carers.

It was Chris who first set Lynn on the path towards a career in environmental fashion. While studying textile design at Dún Laoghaire Senior College, her brother gave her a bag he had brought home from his travels in Asia as a Christmas present, and she began to consider the “potential for creating new things from old things”.

The bag was made from canvas tents that had been used in rescue efforts following the 2004 tsunami in Thailand, by survivors of the natural disaster: the marriage of thriftiness and ethically-driven entrepreneurship struck a chord with her.

Working as an interior designer after she graduated from college, Lynn became aware of “how much waste there was, and the environmental impact [that had] on the climate. The textiles industry is a serious contributor to pollution, the second largest after oil, and 90 per cent of textiles end up getting exported or landfilled.”

Lynn saw it as “a wasted opportunity of a resource. The most sustainable resources are the ones we have.” She started salvaging old furniture and fabric, and soon found her niche in “upcyling”, reimagining materials for new purposes, or as she puts it, “making use of what you have”.

Recycling breaks something down so you can turn it into something new. Upcycling transforms something old by adding or restoring value

Lynn started The Upcycle Movement in 2012 “as a passion project”, to share skills and information about upcycling. “A lot of people didn’t really know what upcycling was back then,” she says. “They thought it was the same as recycling, but there is a big difference. Recycling breaks something down so you can turn it into something new. Upcycling transforms something old by adding or restoring value.”

Lynn initially considered it “a nice hobby or craft”, but within a year, “it had become a full-time, proper business, driven by ethos and values. I’m not sure I could have set out to do it. I wouldn’t have thought it was possible.”

Textiles have remained her primary interest, and for her current design project, NEO, she has combined this with her other passion, the sea. Lynn grew up a stone’s throw from Killiney beach, and her current home is close to the Wexford coast, but it was in Australia that she found inspiration for NEO, a collection of practical accessories made from old wetsuits.

As a composite material that cannot be recycled, neoprene wetsuits end up in landfill, where they do not break down. The waterproof material is so hardy, in fact, that it was used to line the first landfills. Lynn saw an opportunity to create robust accessories from old wetsuits instead: yoga mats, bottle sleeves, purses, totes and pencil cases. As well as their ecological credentials, 10 per cent of profits from NEO are donated to Seal Rescue Ireland, where Lynn volunteers.

Chris’s latest picture-book, Don’t Worry Little Crab, is also inspired by the ocean. As part of this year’s International Literature Festival Dublin this month, the siblings are bringing together their commitment to ethical and sustainable design, and their love for the sea, to create a special art workshop for children at The Ark. Participants will make hanging mobiles using driftwood and “beach treasure”, which in the Haughtons’ vision is everything from shells and stones to plastic waste foraged from the shoreline. Beauty is in the eye of the beholder after all, and as the Haughtons know, there is value as well as pleasure in making something out of what others might call nothing.

Wonders of the Sea: Design and Upcycling Family Workshop is on at The Ark: A Children’s Cultural Centre at 3pm on Sunday May 26th as part of International Literature Festival Dublin. Tickets €11.50. See ilfdublin.com. Chris Haughton will also read from his books at 11am and 1pm, tickets €7.50. The NEO range is available to buy at  theupcyclemovement.com