Watching Panti on stage in full flight, it struck me that show business is also a fight against the dark 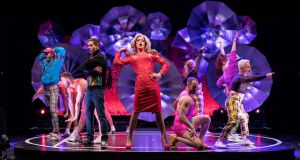 I was at a show called RIOT in Vicar Street recently when someone asked me if I heard about the banana protest in Warsaw. I admitted I hadn't. Apparently hundreds of banana-wielding protesters gathered outside the national museum, because the museum had removed a work showing an artist eating bananas in a sexually suggestive manner.

“Perhaps Poland needs a state visit from Panti Bliss, the Queen of Ireland,” I remarked, “to release them from their moral straight jackets”.

The show RIOT is a flamboyant circus of defiance against all that is dull, mediocre and trapped in cultural straight jackets; it would certainly be amazing to see it on the stage of the National Theatre in Warsaw.

I know a publican who has a flamboyant black moustache, which I envy although I wouldn’t dare grow one myself. As the General says, “you need the right jawline for a moustache.”

I was in his pub recently and I asked him if he remembered a man I used to drink with years ago.

“Pat Tommy Something,” I said. “But I can’t remember his surname.”

“Pat Tommy Joe,” the moustache said, “and he had no surname. He used to come in here every Tuesday on the bus and he’d sit at that table and say – give me the full Irish.”

“I didn’t know you served food in the bar,” I said.

“We don’t,” the moustache replied. “But for Pat Tommy Joe the full Irish was a pint of stout and a small Jameson.”

“Is he still alive?” I wondered.

Again I asked for his surname.

“They didn’t use surnames where he came from,” the moustache explained. “He was Pat-Tommy-Joe-Feather. He was reared on a mountain where people carried genealogy in their nicknames; a tradition going back to the 12th century when chieftains could trace their ancestors back to Abraham. In fact his full title was Pat.Tommy.Joe.Feather.Conceit.

“Why the feather?” I wondered.

“That’s the Irish for Peter,” the moustache explained. “And Pat’s grandfather, Joe Feather, lived on a mountain with a wife and seven daughters, and every day at noon he would put on a dinner jacket with swallow tails before sitting down to his soup. But in those days everybody was starving. So people laughed at him in his dinner jacket and they accused him of conceit.”

I had an image of Joe Feather sitting at an empty soup bowl in his swallow tails, although it didn’t seem conceited to me.

I myself sometimes wear an exotic silk tie at breakfast, even though there is nobody in the house to admire me apart from the beloved.

And my mother always wore a gaudy coloured beret, whenever she was heading into town in her purple Ford Escort, and the sight of her emerging from the car on Main Street with a pink beret cocked to the side of her head would frighten any traffic warden within a radius of five miles.

Not that she wore the beret to frighten traffic wardens. But it too was an act of defiance. A flash of colour that said “No” to melancholy. Putting on a bright hat was her way of protecting herself from depression, or from wasting the day brooding at the television set for hours.

My tie is no different. It’s an unnecessary flamboyance that cheers me up. And like my mother’s gaudy beret, or some old man’s swallow tailed jacket, dressing up in the face of grim poverty, or wearing a coloured beret in defiance of a lonely widowhood, or even my own ridiculous tie, can be a sign of light in the darkness. A gesture more beneficial than a tablet.

Watching Panti Bliss and her entourage of magically garish actors and dancers in full flight on stage, with plumes and feathers and glittering eyelids, it struck me that show business is also a fight against the dark. The colour and jazz of a theatre spectacle cheers everyone up.

Entertainers wear their paint and colours on behalf of the audience. They brighten the hearts of isolated individuals in the offices and workplaces of modernity who sit in straight jackets of conformity, hungering for inner joy. Just like my mother’s hat made the traffic warden smile. Or like my tie amuses the cat. And somewhere in the long ago a tattered swallow tailed coat may have brought laughter to the eyes of seven hungry daughters.