Overheard on Baggot Street: An exchange between Patrick Kavanagh and Brendan Behan

Family Fortunes: An afternoon in Mooney’s pub led to a chance encounter with literary heavyweights 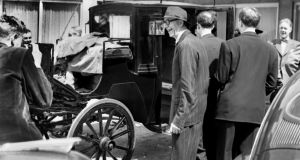 It was 1961 amd my cousin and I were visiting a relative in Baggot Street Hospital in Dublin. We had only been there a short while when more visitors arrived. At that time visitors were restricted to two at a time, so we had to leave, arranging to meet the others, also relatives, later in Mooney’s pub on the corner of Haddington Road and Baggot Street, known affectionately by the locals as the “Maggot Mooneys”.

It was Sunday and opening hours were more restricted in those days, closing at 2pm and opening again at 4pm. We were the first customers. Also the pubs were more functional than today, the furnishings tended to be somewhat austere, consisting of tables and chairs with wrought iron legs, no soft furnishings.

There were two entrances: one from Haddington Road leading into the bar with seating along the wall and stools at the bar leading up into a lounge and an entrance from Baggot Street into a much larger area with tables and chairs.

We had only been there a short time when the door opened and a large figure entered from Haddington Road, wearing a long black coat a hat and dark rimmed glasses, strode down the bar calling loudly as he went, “a pint”. The barman replied, “coming up Mr Kavanagh”.

Mr Kavanagh seated himself at a table in the centre of the lounge, visible from the bar. A short time only had elapsed when suddenly there was a loud crash from the lounge, Mr Kavanagh had banged an ashtray down on the table calling out loudly, “Where’s me pint?”

The little barman scurried out from the bar with pint only half settled.

About half an hour later the Baggot Street door opened. Two men entered, one easily recognisable as Brendan Behan, his picture frequently appearing in the press of the day.They made their way into the bar in deep conversation, paying no attention to anyone.

My cousin and I were talking to each other when suddenly there was a loud exclamation from the lounge. “I smell a pig! Silence!” A hush descended on the bar. We waited in anticipation, certain there was going to be a row. Nothing happened. Then after several minutes a gravelly voice from the bar said loudly: “You should, there’s one sitting at a table down in the lounge!” Behan had responded.

For the remainder of the time we were there, there no more exchanges. Apparently, they had an antipathy for each other from when their paths first crossed which was well known.

What’s the story with dining out under new Covid-19 regulations?
4

Tanya Sweeney: You get a lot of brain space back when you stop hating your body
10