Coming to Ireland after a broken heart: ‘I needed a year to get over the pain’

New to the Parish: Emese Baranyi arrived from Hungary in 2011 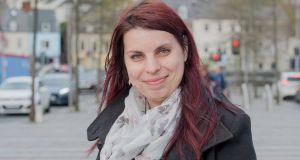 Emese Baranyi: ‘Even though there were moments when I wanted to leave here, there are many nice people and I still see a chance of reaching my goals in the end.’ Photograph: Daragh McSweeney/Provision

When Emese Baranyi arrived in Ireland in 2011, she was nursing a broken heart. She had been working as a translator and interpreter in Budapest when her fiancé ended their relationship six weeks before the wedding. Desperate to make a new start, she started applying for jobs in Ireland.

“There was a good friend of mine who used to work in Ireland and it was her who suggested I try coming here. To tell the truth, I didn’t want to stay in Hungary and wanted to improve from just being a translator. I didn’t see any opportunities to improve myself there.”

In January 2011, Baranyi travelled to Cork for an interview with a recruiter who it turned out had a Hungarian mother. “When you move to a new country you hesitate a bit at first and question whether it’s a good decision. I told him my concerns and he said you’d be stupid to miss this opportunity. He really wanted me to have a job and helped me to get into Apple. That’s what got me over to Ireland.”

The first year in Cork was a struggle between dealing with the culture shock of living in a new country and coming to terms with the end of a relationship. Baranyi tried to mix with work colleagues but found they were busy with their lives outside the office.

“It came to my mind that I used to like dancing so I found a lovely ballet teacher who was a really positive person. I started going to her classes and through that got to know a lot of other girls from different countries and cultures. There were girls from France, Spain and other eastern European countries. Basically, I started my friendships with that group.

“I needed a year to get over the emotional pain of the break-up so I took that time to enjoy life a little and get to know people. When I felt ready I thought I should start doing something with my professional life as well.”

In late 2011, Baranyi attended an education fair after spotting an advertisement for the event. She decided to study a degree in Irish law and went on to do a masters degree in international human rights law and public policy. Holding down a full-time job while pursuing her studies was hectic but Baranyi was determined to make it through to graduation.

“It was like living a double life but I think if you have a passion for something and you love doing it you don’t feel so bad. Studying law gave me an empowering feeling. I’m actually really proud of it as someone coming from a background where English is not my first language and my home country operates through a different legal system.”

In 2016, Baranyi became caught up in the housing crisis when her landlady suddenly decided to sell her home. “It was really challenging to find some proper accommodation and I received rejection after rejection because I work from a home office. Of course, this can hike up the cost of electricity and heating. I said I would pay the difference but people said no. Then I ran into a housing scam.”

Baranyi found a room in a family home and paid six months’ rent upfront to secure the place. However, she quickly discovered there were hidden costs involved. “The lady started making criteria which we hadn’t agreed on before I moved in. I couldn’t really cook, I had to pay extra for her to cook, and I had to pay extra to wash my clothes. It turned out she wanted to operate the place as a student B&B.”

After two months with the family, Baranyi found an apartment through a work colleague and moved out but lost the money she had paid for half a year’s rent. “At first I wanted to leave Ireland but it was momentary anger after bad experience that brought that out. In the end I let the whole thing go.”

While completing her masters in human rights law, Baranyi started helping a friend who ran a news website for Hungarians living in Ireland. “His goal was to give short news reports about events in Ireland. There are lots of Hungarians who don’t have such a good command in English and as our legal systems are different they are not really familiar about how procedures work in Ireland.”

While Baranyi’s goal was to educate people around immigration law, the website received complaints from members of the Hungarian diaspora in Ireland, accusing her of promoting left-wing views after posting an article about refugees in Greece. “There was a troll who started threatening me and one lady said she wanted me to stop contributing to the website because I was a bad influence on the Hungarian community.

“Unfortunately, because of bad propaganda in Hungary there are a lot of people who are not familiar with how the asylum system works. I got really bad feedback from Hungarians after I put up this article. They started talking about how the only true culture was Christian culture. Even now on community pages I notice people putting up fake videos about migrants and creating hate posts.”

Baranyi hopes the hatred she has witnessed among Hungarians is only representative of a small number of people. “Hungarian culture and people shouldn’t represent this type of behaviour because we used to be very kind to guests. But to tell the truth, because of this attitude, I don’t feel good about visiting Hungary anymore.”

Baranyi is currently preparing for her Law Society exams and hopes to practise as a human rights lawyer one day. She also volunteers with Citizen’s Information while continuing to work with Apple in Cork. “I enjoy Citizen’s Information because it’s very close to the legal profession and it consists of providing advice, advocacy and engaging with people face to face.

“Even though there were moments when I wanted to leave here, there are many nice people and I still see a chance of reaching my goals in the end. At the moment I feel good here so I don’t think I would move anywhere else.”

Drivers, slow down for the good of the planet (and your wallet)
6

Ross O’Carroll-Kelly: ‘Sold to the man in the Ireland jersey with a bowtie tied around his neck!’
8

A €29k cottage? A €90k church? One woman’s search for Ireland’s cheapest houses
9

Generation panic: why is there so much anxiety among millennials?
Real news has value SUBSCRIBE