‘My stammer made me very depressed. Children laughed and teachers hit me with sticks’

New to the Parish: Waheed Mohiuddin arrived from Pakistan in 2015 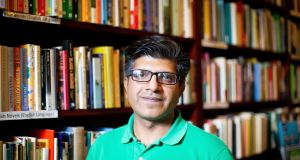 Waheed Mohiuddin was 10 years old when his parents took him out of school. The young student had a serious stammer and was bullied because of his inability to answer questions in class. “It made me very depressed because my classmates laughed at me. When the teachers asked me to stand up and say the lesson, I couldn’t do it so they hit me with sticks.”

After a week of sitting at home, Mohiuddin decided he needed to overcome his stammer. “I thought if my teachers and everybody else could speak, I should also be able to speak. I decided then that one day I would speak to millions. That was the dream, the push that forced me to change. I overcame my stammer without any medicine, it was my own motivation.”

Three decades on, and faced with the challenges of life as an asylum seeker, Mohiuddin often reflects on his ability as a child to overcome adversity. He was working as a lecturer at a university in Pakistan and had published his second book when suddenly he had to leave the country. An academic in women’s studies, Mohiuddin had been carrying out research into child abuse and radicalisation within the Islamic madrassa school system. He was forced to halt the project after his work colleagues warned that threats had been made towards him. Rather than abandon the information he collated, he translated it into a novel entitled Revenge.

“It’s the story of a little boy who was forced to join an Islamic madrassa and there he was being sexually abused for a long time. I didn’t write anything blasphemous. I’m a Muslim and didn’t write any negative words about the prophet Muhammad or the holy book. I don’t understand people’s emotions with their religion. There were multiple threats after I wrote the book. Some of my university students said you are a wonderful lecturer but you have to disown what you wrote. Then I had to leave Pakistan.”

Mohiuddin arrived in Dublin on March 15th, 2015. He had travelled to Europe on a Schengen visa to attend a conference but feared if he returned to Pakistan his life would be at risk. Seeking an English-speaking country where he could claim asylum, he flew to Ireland. “When I came into Dublin I gave the garda my passport and said, ‘Officer, I need protection’.”

After a short stay at the Balseskin direct provision centre in Finglas, Mohiuddin was sent to Clondalkin towers. He immediately signed up to the Irish Writers Centre and contacted the Irish Refugee Council and other support groups for information on how to become involved in the arts scene. “I was used to working so I decided 9am-5pm my work would be not to stay in the hostel. I went out every day searching for opportunities around Dublin.”

Mohiuddin soon noticed others in direct provision were not so motivated to get out during the day. “In the first two months I noticed that here I’d only have two things; eating and sleeping. And for people who have been in the system six years, eight years, they’re used to just eating and sleeping.”

In 2016, Mohiuddin partnered with the Change of Address initiative which staged a reading of the play he’d written at the Axis theatre in Ballymun. That same year he took part in a documentary on the GPO after spotting a sign calling for participants for the series to mark the Easter Rising centenary. “I talk about my connection with the GPO and the emotional attachment I had to the place. I used to receive my weekly payment from the GPO and I had that revolutionary zeal in my soul.”

Also in 2016, Mohiuddin wrote a short story about the culture of sham marriages in Ireland. He recalls being approached by a group of men in Dublin and offered the chance to pay for a marriage to an eastern European woman to secure a visa. Mohiuddin agreed to meet with the men to “investigate” the situation and was told a marriage “package” would cost €12,000. When he explained his wife was still in Pakistan he was told not to worry, that could be dealt with. He then cut contact with the group.

“Because I’m from Pakistan and have brown skin, and because I speak the Pakistani languages, they approached me. Soon after that the Garda Operation Vantage started which I was happy about. I hate these sham marriages because they’re so inhuman. No one is for sale. How cruel are we as humans that we trade people off for a piece of paper?”

Mohiuddin adds that Muslims with more liberal beliefs are sometimes targeted by other residents in direct provision centres. He has heard stories of women being spat on and men attacked. “I’m Muslim but I’m very liberal and liberal or ex-Muslims are facing harassment at centres. There are Pakistani people who do not talk to me because they say I am not a Muslim.”

Mohiuddin now lives in the Eyre Powell direct provision centre in Newbridge and has been anxiously awaiting news on his asylum application since his interview with the international protection office in April 2018. He has worked as a barista since asylum seekers were given access to the labour market and recently completed a diploma in journalism and media studies.

“The right to work was oxygen for us. Since then a lot of lives have changed. Now I see people in my centre waking up early in the morning to catch the bus to work.” He says not all eligible asylum seekers are taking advantage of their permission to work and believes the long wait in direct provision is pushing people into a state of complete inertia.

“When a person is living in the system for six years his body becomes idle. Even when he has status he doesn’t want to work. That might give the centre owners some benefits for a few years but it’s a permanent burden on the State.”

Despite the four-year wait for an answer on his application, Mohiuddin is grateful to Ireland for providing him with a place of sanctuary. “Ireland gave me the opportunity to live and to grow. I understand that I am an asylum seeker and I am not demanding but the system is struggling. We need a system that works for both sides. The system is good for the short term but not the long term.”