‘If we didn’t love it, we wouldn’t get up and run’ 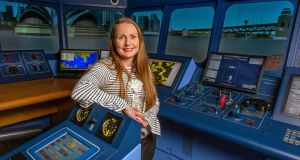 Capt Sinéad Reen, of the National Maritime College of Ireland, was the first Irish woman to qualify as a master mariner. Photograph: Michael Mac Sweeney/ Provision

Not so long ago, a British navy captain received an extraordinary reaction to a video he posted on Twitter in response to a jibe about “women drivers”.

The video was of a warship, HMS Ledbury, neatly berthing between two other large vessels. Captain Rich Harris commented that the manoeuvre was “not easy”, but there was “no fuss”. This was no surprise to him, because the commander was his wife, Claire Thompson.

The smooth nature of the berthing would be no surprise either to Capt Sinéad Reen, who keeps a pair of diving flippers and hard hat close to her academic gown. Her shore office overlooks the magnificent natural harbour of Cork from Ringaskiddy.

Reen is not only a ship’s captain, but is married to one, and has spent 12 years on ships of up to 350m in length. Ireland’s first female master mariner is now second-in-command at the National Maritime College of Ireland (NMCI), as head of its department of maritime studies.

With a surname – Ní Righin – that has Viking roots, it may have been in the genes. She grew up close to the Atlantic, but “on the end of a runway” at Shannon airport. Her father, John, worked with the Marine Rescue Co-Ordination Centre, then based there, and some of his experiences could have put her off the idea of a career at sea.

“There were days when you would hear great stories of rescues, and some when he just wouldn’t want to talk about what happened,” she recalls.

“And then there would be nights when I’d have to share my sister’s room as a British search and rescue helicopter pilot was sleeping in my bed,” she smiles.

A 10-day trip on the State’s sail training ship Asgard II was a defining experience, and her eyes light up as she remembers the impact it had on her. “I got sea sick – I still do – but I just loved it,” she says.

At that point, the Naval Service was not recruiting females – it began to do so in 1994, and the first two female officers, Orlaith Farrell from Dublin and Roberta O’Brien from Co Tipperary, qualified in 2000. By then, Reen was an experienced officer in the mercantile marine, having studied nautical science at Cork Institute of Technology (CIT).

“My first trip in 1992 was from Southampton to the Persian Gulf, and I remember the gradual shift into humid, warm air . . . the totally unspoilt light at night, picking out the different star systems . . . then catching sight of one revolving beam of a lighthouse, and the twinkle of land . . . the impact on the senses as we approached port.”

A while ago, in a response to a tweet about my wife driving her warship, somebody made a comment about women drivers. This is my wife berthing her ship between a container ship and a destroyer. No tankers, no fuss, not easy (video speeded up for ease). pic.twitter.com/yylVCLT9af

It takes eight to nine years to become a master mariner –the progression being from navigation officer to first mate. During that time, Reen worked with Esso, BP, the Norwegian shipping company Bergesen, and P&O Cruises.

Cargo ships were her preference over passenger ships, and much of her time was spent in a hard hat and boiler suit, supervising loading and unloading of oil from refineries and sub-sea pipelines.

Being the only woman didn’t bother her, but it did bother others at times. In some ports, harbour office or shore staff might refuse to reply to a female voice on VHF radio. An experience over Christmas in a large African port was also one that she won’t forget.

“The customs came on board and wanted to take an Indian crewman ashore as he didn’t have the right papers,” she says. “I refused, and then they wanted access to the ship’s medical cabinet. So I took the keys, left, and locked myself away for three hours until they had gone,” she says.

One year, we saw each other for four to five weeks in total

She met her husband, also a mariner, at college. Cormac MacSweeney, who secured his first command at the relatively young age of 31, is son of maritime journalist and broadcaster Tom MacSweeney . His brother, Rowan, also pursued a career at sea.

“This was all before satellite communications and email, and so our only regular communication was by post,” she says. “One year, we saw each other for four to five weeks in total.”

Phone calls could take six weeks to organise, due to different shifts and time zones.

“I remember we once had a silent argument which lasted 21 minutes – at US$14 US for each of those! We were building a house, we had disagreed, but neither of us wanted to hang up, knowing it might be weeks before we could talk again.”

After 12 years, she came ashore to start a family – a “bigger decision than in most careers, especially if both of you are at sea, as you recognise that one of you has to stop”. Still, her transition couldn’t have been better, as she secured a job with the Port of Cork on vessel traffic management before moving to the NMCI.

There are now eight Irish female master mariners, several of whom have been taught by Reen – including Aran islander Sinéad Nic Giollapháraic who qualified this year. Nic Giollapháraic has also been a volunteer with the RNLI’s Aran island lifeboat for 17 years, as one of a number of women saving lives off this Irish coastline for several decades.

There are proportionately a higher number of women on inshore lifeboat crew panels than on all-weather vessels offshore, according to the RNLI’s press officer Niamh Stephenson. There have also been several all-female crew on “shouts”, as Lough Derg lifeboat coxswain Eleanor Hooker can testify.

They respond to an average 30 call-outs a year, for which they spend a minimum of two hours a week in training. It takes at least three years to upskill, with one week spent at the RNLI headquarters in Poole, Dorset, England.

Call-outs have a seasonal pattern – leisure craft in summer, fishing boats in winter, and missing people from September to spring. Since records began at Galway lifeboat station, there have been searches for some 180 people on a stretch that extends from Wolfe Tone bridge over the river Corrib out into the bay.

“That is the hardest part of the work, as you know a successful recovery of a body is still a heartbreak for families,” they explain.

Large cruise ships anchoring in the bay have also relied on the inshore lifeboat crew. Byrne recalls one cardiac arrest and two fractures over the past year alone, with a female passenger having broken her hip shortly after her ship left Canada.

“The ship had a schedule to meet, so she was given pain relief on the voyage across the Atlantic, and Galway was the nearest port then with a hospital. We had invaluable HSE paramedic assistance when making the transfer ashore,” Byrne says.

When pagers sound, it can be quite competitive as the first four volunteers at the station get to go out. One of those must be a qualified helm.

So there have been many “half-eaten dinners, half-drunk cups of coffee”, they laugh, “but if we didn’t love it, we wouldn’t get up and run”.

Has fairytale Kerry castle found a buyer at last?
2