Family Fortunes: It was light blue in colour and it was second-hand. Very second-hand 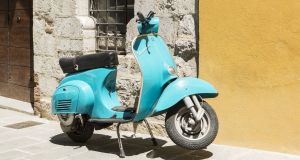 “The Vespa’s engine roared into a feverous hum. The kitchen filled with the pungent smell of smoke and the joy in my heart welled into tummy-churning excitement.” Photograph: iStock

Da cycled to work. It was only a mile or so from Salthill into the bank on Eyre Square in Galway. The 1950s were very unforgiving and no one had money. The key to our front door was never removed, even on weekends when we picnicked on the islands on lower Lough Corrib. Our house looked out over Galway Bay and, yes, we saw the sun go down many times during our innocent and happy childhood days.

Once a month, Da cycled to Headford ( a trip of 16 miles each way) on fair day to open up the bank there. En route back after a day of counting coins and taking lodgements from happy farmers and their wives, Da would take his double-barrelled shotgun from its tethered position on the crossbar and go hunting for rabbits, ducks, pheasants and snipe as well as the occasional woodcock. He earned double pay for his trip to Headford and added synergy to our table with his wildfowling escapades.

One wet and windy evening, Da took delivery of a second-hand Vespa scooter (very second-hand), light blue in colour and finished off with white wall tyres. It had a carrier. It wouldn’t tick over and every time he kick-started it; Da hoped that this time, yes, it might just stay running. No purr would come. A mechanic friend arrived and the Vespa was taken into the kitchen, a stone-floored dimly-lit room at the rear of our house.

“It’s the plug, Jimmy, it’s always the plug!” Before long, one kick-start and we had lift-off. The engine roared into a feverous hum. The kitchen filled with the pungent smell of smoke and the joy in my heart welled into tummy-churning excitement.

Da never cycled to Headford fair again. He revved his Vespa up and sped away on fair days. A friend made a wooden box from marine plywood and it was placed on the carrier. Our springer spaniel, Grouse, jumped up on the saddle and from there into the box where he curled up, ready to be ushered to the shooting fields of the west of Ireland.