Jack O’Hare’s life took off when his mother won a huge cash prize. Then Frank Lloyd Wright invited him to come work for him in the Arizona desert 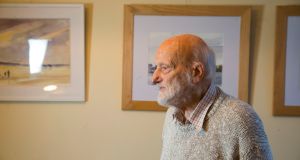 After a busy career, 99-year-old Jack O’Hare is leading a quieter life these days in the small apartment he and his wife, Peggy, share at Havenwood Retirement Village on the outskirts of Waterford city. The Frank Lloyd Wright-trained architect, whose working years also involved teaching, painting and writing, has been living here for the past couple of years, since Peggy had a bad fall and broke her spine.

“It’s supposed to be temporary. I was hoping we could go back to our old house, but it would be too much for Peggy, the stairs are very steep. The place is so small it’s untidy, no matter where you put things they’re always in the way. And all the things you’ve had all your life, what do you do with them?

“It’s a perfect environment for sitting back though, doing nothing, or falling asleep in a chair. What would I have done today if you hadn’t come? I would have gone over my infinite boxes of medicines. I might read a book possibly. I don’t paint, I don’t walk much now.”

Life for O’Hare started north of the Border in the town of Newry, where he lived for the first two decades of his life. When he was 13, life took a dramatic turn.

“My mother’s sweepstakes ticket came up. We were struggling along, she had 10 children. It was tough to survive. My father got a present and went out and wasted his money, bought a huge car that he never used. But my mother had won £15,000, which was like €15 million today. That changed our whole lives.

O’Hare moved to Dublin to study architecture in his 20s, but found the subsequent work less than satisfying.

“In one particular office there was a client who had a little vessel screwed on a wall and filled with holy water. The office was to develop the design of the container fitted with a lamp that would throw the shadow of a heart on the wall. I mean, what an idiotic idea. And after all my years at college. So I told them goodbye and went to the Board of Works.

“But that had nothing to do with architecture. I was wasting my life and I wondered what I could do. Since I had studied Frank Lloyd Wright at college, I decided I’d write to him. He sent me a scholarship. And that was the beginning of my life really.” He worked first at Lloyd Wright’s Taliesin estate in Wisconsin before moving on to Taliesin West, another sprawling Lloyd Wright project in the Arizona desert.

When he arrived there he was given a tent and told he could pitch it anywhere in the surrounding desert and that was where he would live.

“That was fascinating. The desert was full of dreadful creatures that I had never seen in my life – hela monsters, rattlesnakes, scorpions. If you left your sleeping bag on your bunk during the day a rattle snake could come in and find it very warm in the bed. To find that in the evening, when you’re coming in for your own nap, was terrifying.”

They grew their own food at Taliesin and the first task on arrival was to spread manure.

“That was the new architectural training! It was crazy, but wonderful. We all helped to run that home. Cleaning, working, building chairs and things. In between, you were building.”

He learned a lot from Lloyd Wright and came to be of the opinion that he had learned nothing over his five years at university.

“I began to see architecture from a different perspective. By the time I left there I was ready to join three others and go to California. We decided to build a house, sell it and have that experience of building everything in the house.”

They built the house, by hand, from scratch.

“We even put the heating in. We all did different parts of the woodwork, made the building blocks by hand. There was a tree growing on the site and we decided to cut a hole and let the tree come into the living room. Every joint of every block had a steel bar in it. The whole lot had to be able to move right down to the foundation. It’s gone through about four earthquakes since, so it’s weathered well.”

After California, O’Hare returned to Ireland, which he describes as something of a shock to the system.

An awful lot of Irish so-called architecture is produced by builders, and builders don’t learn to design buildings

“From an architectural point of view, it was sickening. I was hoping to start a practice and get thought-out buildings built in Ireland, but no, everybody wanted four walls with a flat roof or sloping roof and windows. It’s really not architecture. Architecture is the art of building. An awful lot of Irish so-called architecture is produced by builders, and builders don’t learn to design buildings.”

Has architecture in Ireland improved since then?

“I don’t think so. I don’t think it will ever change. Maybe little bits, but not enough. People aren’t really interested. When I came back to Ireland the world certainly wasn’t rushing at me to get a building. I was sitting at home, daydreaming.”

He built a small house for his mother in Killiney. A neighbour used to pass it and he decided he’d like a big house, like it.

“So I took that on and built his house. His wife was a very conventional woman and when she saw the way I was going she made a lot of noise. I kept going, but she refused to live in it when it was finished, so the doctor lived on his own in the house. It was a very interesting house. It’s still there and I’d say about four families have moved in and out of the house since.

“After that I did another few houses, but I was getting on a bit and I couldn’t dream forever. I met Peggy, we got married and I took a job in London, but London is noise and dirt, so we decided to go back to California. Three kids came along, but after 12 years, when the kids were going to a local school, I found out the headmaster was giving drugs to the kids and I said I’ve had enough, let’s go back to Ireland and start living a quiet life.”

Back in Ireland, O’Hare tried again, setting up an architectural practice.

“It lasted for a while and I built my own house at the backstrand, but it’s so far out and we moved in to Waterford city where we lived for more than 30 years. Business wasn’t great. I suppose I was sitting around the house a lot and Peggy said why don’t you go and get an architectural job and I got a job which was grand for two or three years until that practice went bust. I saw an ad for a teaching job in the technical college and I applied for that and I got it and that was the end of my career in architecture. I spent about 10 years teaching architecture and drafting skills until I retired.

“And now I’m here. I’m just on the edge of 100. I’m 99 and in another year I hope the Government will tap me on the shoulder and say well done old fellow!”

Does he look back on his career and life with fondness?

“It was a very enjoyable life, most of it. Bit disappointing with some of the architecture, but architecture isn’t all of life. When I met Peggy that was a great joy for me, because Peggy is an unusual woman. She was a wonder to live with for nearly 50 years, and bringing up the kids was great.”

And what are O’Hare’s thoughts on the future?

“It’s very quiet. It’s a nice life, but you’re really waiting for some sort of end which is not so nice if you think about it. I’d like to go on for another 10 years if I could, but I don’t think so. I may get one or two at the very most. And architecture? I’ve lost all interest in it. I’ve written quite a few books and I may write one more if I can spare the time. None of my books are published. They can wait. My kids can do something with them if they want.”