I'm glad my daughters don’t know who Peter Casey is

Are We There Yet?: My daughters never doubted Higgins would return to the Áras 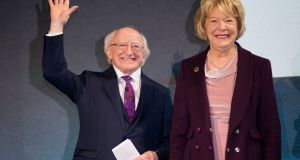 Like most sensible people, my daughters never doubted Michael D Higgins would be returned to the Áras. “This election is so boring compared to repeal,” said one of them over their porridge in the middle of the campaign. “I was worried about what would happen with the repeal one. But I’m not worried with this one because I know Michael D will win.”

Maybe this was why they had no interest in coming along with me to vote for my president of choice. A foregone conclusion is not their idea of fun. They went through the whole election campaign without knowing a single thing about the other candidates. They were aware there were a few other people involved but like much of the country, they were wholly indifferent to that fact.

It’s a source of pride that my daughters still don’t know who Peter Casey is.

The presidential election was a very different scenario to our family’s repeal referendum experience. Because campaigning to remove the Eighth Amendment from our Constitution had been central to my life for the last few years, they couldn’t escape the twists and turns of that emotional electoral contest.

From overhearing passionate conversations with friends and family in our kitchen, to watching me shout at the television, to making their own repeal posters and deciding they wanted to wear Yes badges into school, we lived and breathed and endured that referendum together.

Their favourite, damning insult for me in the weeks leading up to the vote was “Mum, is repeal all you care about?”

Sometimes I hadn’t the strength to lie and I just told them “yes”.

Next week it will be exactly six months since that bright referendum morning finally dawned, a day many of us thought we’d never see in our lifetime, a day my daughters insisted on joining me at the polling station.

It was a moment of daughterly solidarity I’ll always be grateful for.

They saw me shake my head in disbelief as I marked the Yes box in their old junior infants classroom. They didn’t slag me, at least not too much, when I cried as I placed my paper in the ballot box.

They said nothing when I was finished, they just reached for my hands as we walked out the door.

The girls knew I’d had an abortion. They knew what removing the Eighth Amendment meant for me, and for them and for people all over Ireland. I had told them about my abortion the day we bought their hamster, a fiercely wanted pet the purchase of which had been sanctioned after an intense bout of repeal campaign-related parental guilt.

I wanted to call her Choice but she was their pet and they called her Ziggy. (People come to our house and say “Ziggy, after David Bowie?” And my kids say “David who?”)

On the short walk home from voting Yes for repeal, we noticed that on a grey pillar near our house someone had written a big, aggressive “No!” in black paint.

This last-ditch attempt to change passing hearts and minds was in full view of the polling station. It put me in a rage – I was almost permanently in a rage at the time – but I tried to keep a lid on it. When we got home one of my daughters went to her paint pots, mixed up a tray of black and white paint, and in her first act of public vandalism led me out the door to paint over the “No!”.

“It’s gone,” she said as we stepped back to admire our paint job.

“And you know Mum,” she said “the Eighth Amendment is going to be gone soon too”.

When I’m sitting daydreaming in a chair somewhere decades from now, I’ll think back to that moment and the memory of it will warm my bones. The Eighth Amendment is history, Michael D is still in the Áras and Ziggy keeps spinning on her wheel.

There are lots of bad things going on in this world.

And so what you have to do is cling to the good.

Some good things to do with children this weekend . . .

We’ve probably never had a president that has spawned such a vast array of merchandise, from birthday cards to tea cosies, Michael D merch is everywhere. This new “Miggle D Giggles” toy is your own personal pint-sized President of Ireland. He’s the first creation from a fledgling Irish toy company who told me they “became so enraptured with our President’s messages of inclusion, love and shared joy”, that they wanted to make their own miniature visionary leader. Press his belly and he laughs just like Michael D. It’s actually uncanny. Miggle D Giggles costs €20 can only be ordered online a miggledgiggles.com with 10 per cent of proceeds going to CMRF Crumlin, which is the fundraising body for Our Lady’s Children’s Hospital, Crumlin. I’d be very surprised if he doesn’t end up on the Late Late Toy Show on November 30th.

Rebellion Day
Politically aware and animal-loving kids might be interested in getting involved in some activism over the weekend. The latest WWF Living Planet Index tells us that since 1970 there has been a 60 per cent fall in wildlife populations and a mass species extinction is underway. The Eco Feminist Coven, who are involved with Rebellion Day, are joining a protest outside the Dead Zoo in Dublin on Saturday, November 17th. They say it’s time for “a mass rising of people to call on those in power to stop destroying our planet. It is time for Extinction Rebellion” . Join them and climate activists globally for Rebellion Day on Saturday at 2pm outside
the Dead Zoo in Dublin to call for #climateactionnow

Yarn Storytelling Festival
It’s the last weekend of the Yarn Storytelling Festival in Bray, Co Wicklow.
There’s lots going on all weekend but one highlight is Music & Me with the Little Bray Writers’ Group. Readings by the group are enhanced by the beautiful guitar playing of Gerry Anderson while a themed slide-show by Deirdre Ridgeway complements the performances. Sunday, <NO1>18th<NO>November 18th, 6pm, Mermaids Arts Centre, Bray. In the Little Bray Community Centre, Fassaroe there is more storytelling on Saturday, <NO1>17th<NO>November 17th, at 4pm for ages 5 and over. Admission is free. mermaidartscentre.ie

This festival runs until Sunday, November 18th, and there is plenty to do all weekend including the chance to create 3D artworks in the Crawford Art Gallery. These 20-minute sessions must be pre-booked and they run all day on Saturday, November 17th. There are plenty more science-related events in libraries across the city. Random science fact: “Neuropsychological research has shown that reading is the most effective way to overcome stress, having a better impact than listening to music, drinking tea, or even taking a walk. Evaluating heart rate and muscle tension, it takes just six minutes to relax once someone starts to read”. corksciencefestival.ie

Mental health: How to mind yourself during the shut-down
5

Older people on isolation: ‘I have plenty of food but not much appetite’
9

A journey through the Americas: Is this the end of the road?
Real news has value SUBSCRIBE