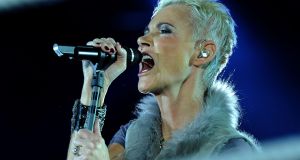 Marie Fredriksson, lead singer of Roxette, the Swedish pop duo that briefly ruled the American charts in the 1980s and 1990s with dramatically lovelorn ballads and catchy up-tempo singles, died on Monday. She was 61.

Her management team, Dimberg Jernberg, did not specify the cause of her death but said in a statement on Tuesday that Fredriksson was first diagnosed with a brain tumour in 2002.

Fredriksson and singer-songwriter Per Gessle formed Roxette in 1986. Each had achieved moderate success in Sweden; they decided that together they could strive for international stardom. “Swedish critics said we’d never make it, but they were wrong,” Fredriksson told the Los Angeles Times in 1990.

The duo, however, broke through in the United States in 1989 when Dean Cushman, an American student who had visited Sweden on an exchange program, brought a copy of the Roxette album Look Sharp! to a local radio station back home in Minneapolis.

Roxette, like Abba before it and Ace of Base after, achieved huge success as a Swedish group singing in English, making immaculately crafted pop music. The duo did not just offer counterprogramming to hair metal and grunge, they made a pop melody feel like a statement of lung-busting defiance, even when the lyrics were daft poetry like “tasty as a raindrop.”

On hit power ballads like Fading Like a Flower (Every Time You Leave), Fredriksson sounded as if she could triumph over heartbreak by leaning on a sturdily constructed song. “I think somehow I am more vulnerable if I am singing in Swedish,” she said in a video interview from 2000.

Certifying its status as a superstar band, Roxette even got its own stamp in 1991, issued by the Swedish postal service. “It’s nice having the entire Swedish nation licking your back,” Gessle said in Rolling Stone.

Marie Fredriksson was born May 30th, 1958, in Skane County in southern Sweden. Her family was poor, but singing was free: she sometimes would wake up her parents by singing early morning opera into her mirror. Fredriksson cited Billie Holiday, Ella Fitzgerald and Chick Corea as early influences; later, her favorites would be Mick Jagger and Tina Turner, whom she admired both for their vocal abilities and for their onstage charisma.

She played with two bands – punk group Strul and new-wave duo MaMas Barn – and released two eclectic solo albums in 1984 and 1986, before joining forces with Gessle.

Explaining their partnership to the Los Angeles Times in 1990, she said: “People ask all the time if we’re married or romantically involved. They insist we are, but we’re not.”

Although Roxette’s popularity in the US peaked between 1989 and 1991, its career lasted longer around the globe. The band released a total of 10 albums through 2016, seven of them certified platinum in various countries; videos of the duo’s songs have attracted over one billion views on YouTube.

Fredriksson’s career was derailed in 2002 when she suffered from a seizure, fracturing her skull on her bathroom floor. Testing revealed that the cause was a malignant brain tumour. Recoveries and setbacks followed, but she kept making music (she made three solo albums after her diagnosis), and in 2012 she embarked on a reunion tour with Gessle.

Fredriksson is survived by her husband, music producer Mikael Bolyos – they met when Roxette was touring Australia in 1990, promptly fell in love and decided to marry 48 hours later – and two children, Josefin and Oscar.