They let my father die. He would not have wanted to live like that

Hilary Fannin: He’d hastened his own death with amber whiskey and a frisky little Merlot 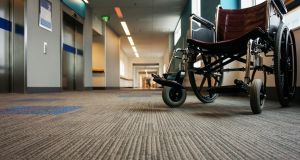 “His last Christmas present from his family was a firm launch into the deep waters of eternity. Usually we just bought him a book.” Photograph: iStock.

Friday the 13th; unlucky for some.

My father died on December 13th, though that year, 2000, it fell on a plain old Wednesday, near the beginning of a new millennium that was disinclined to throw him a lifeline.

He was in a coma for a week before he died. My brother and one of my sisters had gone to the ethics committee in the hospital where my father lay, leathery and lip-cracked, and asked that there be no attempt to revive him. They requested that the surgeon, a briskly efficient man, not splice and sew up my father’s battered liver and glue his cancerous bones together so that he could soberly stare out the window of some care home or other, nursing a milky tea and contemplating the error of his ways, until the end of his penitential span.

He wouldn’t want to live like that, he couldn’t bear to live like that, they told the suited gathering. He’d rather be dead. He was not a sentimental man, he would not want to be pulled out of the lake to witness our shiny, tear-stained faces and grasp our welcoming hands.

We weren’t tear-stained anyway; we were raging at the prospect of his medical resurrection. He’d hastened his own death with amber whiskey and a frisky little Merlot, and, regardless of the season, it was not in our gift to give his life back to him.

They let him die. His last Christmas present from his family was a firm launch into the deep waters of eternity. Usually we just bought him a book.

It’s been nearly 20 years since he left and, of course, lots of other people have followed. Once the slipway is cleared, the traffic, it seems to me, is pretty ceaseless.

The other night I was drinking free wine after an awards ceremony in one of Dublin’s glorious bars, Kehoe’s, on South Anne Street; the same bar where my father’s old mate Dardis Clarke had wept great sprouting tears for him that Christmas. Dardis, the son of the poet Austin Clarke, was a figure on Dublin’s literary scene, a small man who always dressed in black, with bright, round eyes and a great white beard and moustache (he’d never once shaved), and when I went to the bar to buy him a drink to console him, I felt like I was marking the end of an era.

I’d won an award on that day of the free bar in Kehoe’s. I was delighted and genuinely surprised, and I had a few glasses of wine (and some of water, too, because I just can’t drink like I used to). The bar was crowded with newspaper folk, and I got talking to a man in a pink tie who told me that when he was a young journalist he’d known my father, who was a freelance cartoonist, and some of my father’s cronies. This would’ve been back in the day when my father would draw from 8am until noon and then have a largely liquid lunch in a bar on Baggot Street, where the spot by the window was permanently reserved for his cohort.

“What age was Bob when he died?” the man, who I failed to recognise though he is at the top of his profession, asked me.

“I’m surprised he lasted that long.”

I recalled those days in the 1980s when Bob would telephone me from the payphone in the Baggot Inn and invite me to join him for a lunchtime drink and a toasted sandwich. I would gladly meet him there or in O’Donoghue’s or Doheny and Nesbitt’s. I was an actor back then, often unemployed, sometimes lonely, and generally more skint than he was.

“I’m surprised he lasted that long,” my companion said, and he wasn’t speaking unkindly, just factually.

I’d never really thought before about how my father might have appeared to younger colleagues on the various publications where he worked. I glimpsed something of him that night that I hadn’t allowed myself to see before: a man in a long green gaberdine, shambolic, bohemian, belonging already to a distant world.