Jennifer O’Connell: 'I’ve seen the future and I want no part of it’

One day, we’ll have to explain to young children what olde worlde phrases like ‘phone call’ and ‘customer service’ and ‘drove myself’ meant 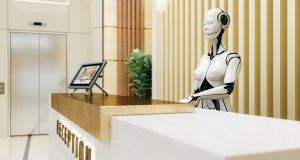 Instead of a reception desk with a bank of smiling staff waiting to murmur sweet nothings about wifi codes and breakfast being served until 10am, there’s a bank of iPads

I’ve seen the future in a hotel lobby in the British West Midlands.

I am here, having stumbled out of bed at 2.30am, driven two hours to make a 6.30am flight to Birmingham, where I hired a car. And then I drove myself another hour in torrential rain to my hotel. And now it’s 9.30am. How is it only 9.30am? What I really want to do is check in, charge my laptop, have a shower and a coffee, before embarking on my favourite kind of day’s work – a day of talking to strangers.

But it was never going to be that easy. When I made the booking, instead of the standard welcome message full of niceties about car parking and check in arrangements, I got a terse email about how cancellations and modifications to my booking are not permitted, and how in the event of non-arrival, I would be charged for the full stay, the room would be released, and baby hedgehogs would be put to a slow and painful death.

“Got a question?” it asked. Then don’t ask it. “Visit our FAQs. If you don’t find the answer you’re looking for you can also contact us [no contact details provided] or chat* with the team. *web chat is only available certain times of the day.”

Anyway, I’m here, and you’d think after all that, they’d be pleased to see me. But they don’t see me at all. Instead of a reception desk with a bank of smiling staff waiting to murmur sweet nothings about wifi codes and breakfast being served until 10am, there’s a bank of iPads. The iPads won’t recognise my booking, offering only that reproach familiar to anyone with an apostrophe in their name. “Please enter only recognised characters.”

Eventually, a human arrives to help. But then she says she can’t check me in until 1pm, as early check in doesn’t start until that time. And on and on and on my morning goes, until eventually we’re both so worn out, she gives me a room card. “We don’t normally do this,” she says, a lot.

Much later, when my article is filed, I decide to order some chicken tacos. But where the phone should be is a note saying, “Our phones have disappeared. You can now download our APP for the easiest way to contact Guest Services.” But I don’t really want to download an app. I’d like to just talk to a human.

There’s no point in fighting it. This I do know. The future we’ve been anticipating is already here. One day, we’ll have to explain to young children what olde worlde phrases like ‘phone call’ and ‘customer service’ and ‘drove myself’ and ‘smiling staff’ meant. Machines will be in charge. There won’t be any need for customer service -- because how can the customer always be right, when the algorithm is actually always right?

I won’t have to drive myself anywhere or decide what to eat in a restaurant, because there will be technology to do it for me. I won’t have to fret about that mole on my knee or why my eyelid is trembling again, because the machines will have diagnosed and treated me before I’ve noticed any symptoms. I won’t have to lie awake worrying about money either, because I’ll have had my own personal investment adviser making decisions for me from the age of 12. Machines will create music, movies and books exactly tailored to my taste and mood. It’s not that far off, this future free of discomfort and uncertainty and chance and spontaneity and human contact.

This thought is miserable enough to propel me out of my pyjamas and back downstairs to order my food, where I’m pleased to see one behind the bar. An actual human, standing there grinning, like a relic from another era. There is a disagreement between my Irish accent and his West Midlands one, which means that he put in an order for chicken tenders instead of chicken tacos. When I point this out to him, he looks perplexed. It’s my accent, I tell him. “I get it all the time here. Today, when I said ‘lazy boy’, someone heard ‘ladyboy’.” He laughs at this. Then he remembers we live in a time when it might not be okay to notice differences like this, says worriedly that he didn’t mean to cause any offence. He says he’ll order me some tacos on the house and I can have the tenders as well.

As I head back to my room with a paper bag filled with several kinds of chicken, or so I think, I hear the not entirely welcome sound of footsteps coming too quickly up the corridor behind me. But it is just the barman again. I have forgotten the tenders.

I’m glad I didn’t order through the app. I’ve seen the future – a bleak place free of awkward misunderstandings and laughs and small talk and kindness and complimentary tacos – and I want no part of it.