Do show up at this year’s staff drinks, but don’t hug anyone, and have an exit strategy 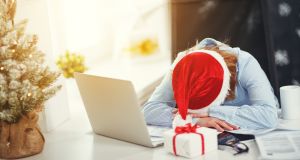 Some people find starting or arriving late and drinking slowly can be good ways to get around this pressure. Always have a glass of water in front of you.”

“Tis the season to be jolly” . . . or so the song goes. While some of us embrace every social opportunity the festive season brings, for others, especially if we’re a little shy or socially awkward, there’s nothing very jolly at all about the prospect of the work Christmas party. We spoke to the experts and assembled a guide to surviving the company-mandated fun.

Show up: The work Christmas party is important for a variety of reasons. “It allows you to get to know people in a relaxed environment outside the office, to network with colleagues and managers in a social, informal way, which helps you build stronger personal relationships with colleagues and clients alike,” says Ronan Kennedy, a career coach and business mentor.

When everyone is a bit more relaxed, it can also be an opportunity to learn about business issues that aren’t strictly related to your role. “What strategies are in place, what positions are opening up in different departments, what kind of person xyz is and how that can give you an edge,” Kennedy says.

It is important to show up. “It shows you are interested in the people you work with on a personal level, that you care about them as people beyond the business. It helps build trust, and creates a nicer environment to work in.”

Don’t take too much on: Say no to other things either side of your work do, so you have the energy to engage at it and not be overwhelmed, exhausted or hungover.

Don’t pressure yourself: For the less extraverted, thoughts of socialising on this scale can be triggering. “There is no pressure on you to be the life and soul of the party,” says Síle Walsh, a coaching psychologist and organisational consultant. “You should be comfortable being the observant one, listening and engaging, rather than forcing yourself to be more vocal. There are lots of people who want to take up that role and you will be a perfect match for them.”

Find a buddy: If you’re new to a company, or find large social gatherings difficult, it could be an idea to confide in a colleague and ask them to be your support for the evening.

“It’s not an accident that people over-drink at these events. They do it to bring down inhibitions so they are not too nervous,” says Kennedy. “Some people find starting or arriving late and drinking slowly can be good ways to get around this pressure. Always have a glass of water in front of you.”

“You’ll find if you confide in a trusted colleague, that they may have their own concerns about socialising, in general or specifically with work,” says Walsh. “You can arrange to go for a drink together beforehand, share a cab or check in on each other throughout the evening.”

But be smart in choosing who you share this information with, however. “Don’t go saying it to the life and soul of the party. They may not be able to relate, and on the night will be too busy living it up to support you.”

Stay positive: “When we feel threatened we focus on difference,” says Walsh. “On anything that makes us feel rejected. Instead we should consciously focus on what we have in common with other people. Check out your colleagues’ social media accounts in the run up to the Christmas party to get a sense of who they are, so you don’t feel like you are going in blind.”

Prep some conversation points: One of the most awkward feelings in the world is when a lull hits a conversation. Have a few topics prepared, in case this happens. It could be an interesting article you have read, something unusual you heard on the radio, a recent television programme you watched, or a great series you have started on Netflix.

“Just be careful not to over rehearse these topics before hand,” Walsh cautions. “If you do that, the conversation will lose all sense of authenticity and even though you said all the right things, people won’t connect to it, which can trigger anxiety.”

Avoid awkward conversations: It is important to know your comfort level discussing certain issues. If you know that you are uncomfortable talking about your love life, or politics, have a plan in place for when they come up. “I would use humour to push back in a way that says, ‘here’s my line, please don’t cross it,’ but in a way that’s not likely to create an awkward situation,” says Walsh. “I find the line “‘Jaysus, a guard wouldn’t ask me that’ always works.” Or you can always just excuse yourself and go to the bar or the bathroom during conversations you don’t want to be involved in.

Equally, avoid talking about controversial, polarising or taboo issues like money, sex or religion, and be careful of making inappropriate jokes. You don’t know everyone’s backstory and what mines you could set off.

Apologise for any faux pas: We can all put our two feet in it, especially after a few drinks. How you dial it back is what people will remember. “Apologise and move on”, says Therese McCullagh Melia of the Etiquette Academy. “Don’t labour the point. You accidentally said it, just say sorry, and move on.”

If the offended person is reactive, you should extract yourself. “Say ‘oh gosh, there is so and so, I haven’t spoken to them all evening’, and give them space to simmer down.

“For more serious offences, bring a friend to witness it and make sure the person knows that you’re not making excuses, that you know just how offensive what you said was and that you want to repair the damage, if that’s possible,” says Terry Prone of The Communications Clinic. “Depending on your age and role and the age and role of the person offended, you might want to check your company’s HR policies around equality, diversity and bullying.

“Equally if you notice someone else putting their foot in it, say something to the offended person along the lines of ‘Everybody’s entitled to one god-awful mistake, aren’t they?’ Then turn to the offender and say ‘Sunshine, your god-awful mistake allowance has been exceeded. I suggest you go home right now so we can all forget it’.”

Do not touch: “If you don’t know somebody, it is best not to kiss or hug them, as you don’t know how they will take it,” says McCullagh Melia. “Handshaking is the most acceptable.”

If you have a tactile colleague, it’s best to bring the issue up in private, rather than creating a scene. “Take them aside and tell them “I want to confide in you, I don’t like being touched, so would you mind not hugging me in future’. But don’t bring it up in front of others as it can lead to embarrassment and resentment.”

Have a strategy: If having an exit strategy makes you feel more comfortable going into your Christmas party, then by all means make one. But Walsh finds having strategies for during the event are more likely to increase your enjoyment. “Excuse yourself and go to the bathroom so you can have some space. Walk around the venue. Go outside and get some air. Regulate your system. It will help you feel less pressured or overwhelmed.”

If you do decide to go, your exit strategy will be dependent on your circumstance. “A lot of people feel they are letting people down,” says Kennedy, “a feeling that is exacerbated when people ask them not to go, or get another round in which you will often feel pressured to return. I find it best to have an early morning engagement prepared for the next day to help get around this.

“Rather than doing an Irish goodbye, the best thing to do is say goodbye to your immediate colleagues and team, along with those whom you’ve had longer conversations, then go.”

Remember your bosses are people too: “No employer goes to a Christmas party to spy on employees,” says Prone. “What will sink an employee is outrageous behaviour like open drug taking, upchucking into the boss’s handbag or propositioning a junior. Don’t provide those moments and you don’t have to worry.”

Engaging with your superiors is one of the trickier aspects of party season, but it is good to express your gratitude if they were responsible for putting on the party. “They will remember you as the nice guy who said thank you at the party,” says Kennedy. “Just don’t ruin it by lingering.”

Stay off social media: Avoid posting photos on social media. Your boss might not want her husband to see her chatting to the intern in the background, or Carol from accounting might have told her kids that she had given up the fags, but there she is holding a butt in your Facebook pic. “If you absolutely must do it as part of your role, take photos at the start of the event, with everyone’s permission,” says Kennedy.