Christmas is a feminist issue: Who does all the menial, emotional, mental labour?

It is time to strike – You never know, you just might get a Christmas miracle 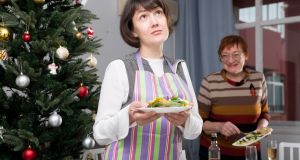 To answer Caitlin Moran’s question, ‘Are the boys doing it?’ in the vast amount of cases when it comes to Christmas “they most certainly are not.”

My family is blessed. We live in a house with a self-cleaning bathroom. What’s that, you ask? Well, it’s a bathroom that regularly replenishes itself with clean towels and full tubes of toothpaste. The loo roll automatically replaces itself and the small bin under the sink empties itself when full. The hot press is refilled with clean bed linen, and clothes in the laundry basket somehow get themselves to the washing machine and back to dry by what seems like magic.

Mea culpa. I tell a lie. My family used to live in such a wondrous place until last week, when I went on bathroom strike. For five days I stopped doing all the necessary chores associated with the bathroom, and yes, even though I am very, very far from being a house proud or tidy person, I found it difficult. But in the service of feminism if not sanity, I bit my lip at the empty loo roll holder, the dirty towel still on the handrail and the toothpaste stains smeared all over the handbasin, until eventually I could stand it no more and I informed the other people I share a home with that there was no magic elf and if they wanted the bathroom cleaned they would have to do it themselves.

Cue shock, horror and disbelief; dear Lord, you would think I’d told them that Santa himself doesn’t exist.

Fortunately, however, we know that not only does Santa exist, but Mrs Santa will send her elves to earth to do all those chores that need to be done in every household before Christmas. You know the ones I’m talking about: the ordering gifts online and ensuring they are delivered on time: The gift wrapping of the pressies that need to go under the tree (has anyone seen the sellotape?) and purchase of all those itty-bitty gifts needed for Christmas Stockings (the dog needs one too) that hang over the fireplace.

There are three types of unpaid labour that women are expected to do, without thanks or recognition let alone financial compensation

There’s the extra decorations that make the house look properly festive – don’t forget a new wreath for the front door, they’ll be sold out before December 15th! – All this in addition to the necessary house cleaning, food buying and meal cooking that must be done before we ring in the New Year.

Oh sorry. There I go, lying again. Because whatever about Santa, sadly there have been no houseworking elves in my world since I left the Mammy and moved into my own home. That is when I discovered that there are three types of unpaid labour that women are expected to do, without thanks or recognition let alone financial compensation.

Firstly, there is menial housework, as in the aforementioned bathroom and sitting room and repeat ad nauseum. I am talking about all the repetitive, boring stuff we have to do so that Health and Safety doesn’t stage an intervention. This is the work that is done primarily by women – and when the men do it, they expect a reprieve from all menial jobs for at least a month as well as a huge clap on the back while a Greek chorus plays “Isn’t He Wonderful” behind them.

(Obviously, I’m talking about the majority of men here. There is a lot of empirical evidence to back me up, so please don’t email, text or tweet me saying you’re a bloke that does housework and I’m a nagging, ball breaking, feminazi. I get lots of communication like that already thank you.)

In the workplace, recognising and organising what needs to be done is called management - when a woman does the same at home, it’s called nagging

Second, there’s mental labour, which includes the planning of dinners, school lunches, kids clothes, dental appointments. It’s lying in bed figuring out play dates, present buying and how on earth you’re going to get the dishwasher repaired while picking up the groceries, visiting your Granny and working a full time job. It’s when you nag at your spouse or kids about having to do it all solo and they roll their eyes and say, “make a list” or “just tell me what needs doing”.

This drives me crazy because in the workplace, recognising and organising what needs to be done and then delegating those tasks is called management. This is a respected job which is rewarded with appropriate remuneration and status. When a woman does the same at home, it’s called nagging. There is no reward and no appreciation of your managerial skills. There is definitely no status associated with it. Except the status of skivvy and martyr.

Third, there’s emotional labour, which involves ensuring that everyone stays happy, included, cared for and satisfied.

Arlie Hochschild, the sociologist who introduced this phrase, defined it as work (paid and unpaid), where you “induce or suppress feeling in order to sustain the outward countenance that produces the proper state of mind in others”. Bluntly, it’s putting a smile on your face as you serve Christmas dinner when all you want to do is tell the world to feck off and then lock yourself in the sitting room with the dog and a large (bottle of) gin to watch reruns of Poirot (me, pretty much every Christmas Day).

The simple answer is that most men don’t want to do all that stuff. Why should they – it’s thankless work

You don’t have to be a feminist to resist doing the three types of work I mention above. You just have to be a man. Because, to answer Caitlin Moran’s question, “Are the boys doing it?” in the vast amount of cases they most certainly are not. They will leave the cooking and cleaning to you but assume they are doing their fair share if they fill the dishwasher after Christmas dinner and wash the odd pot.

It is the biggest mystery of all time. Why – despite all the advances of feminism - do women still do the lion’s share of housework, the second shift? Why, in 2019, does the latest ESRI study show that women spend double the time of men on caring and more than twice as much time on housework?

The simple answer is that most men don’t want to do all that stuff. Why should they – it’s thankless work. And while women continue to cook, clean for them and pick up their dirty socks, they don’t have to.

Ladies, I’ve come to the conclusion that it’s time to strike. And then wait to see if Mrs Santa sends those house elves to visit. You never know, you just might get a Christmas miracle. And if not, at least you’ll have a less stressful one.