It is worth reminding ourselves that a phone a communication device and a productivity tool. That’s all. 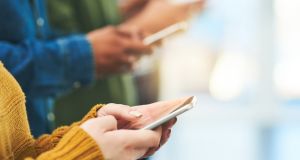 My friend J made a flying visit from San Francisco recently. Over dinner, we tackled some of the big, pressing questions of the day, such as the US education system, climate change, populism and what exactly Irish people mean when they say “grand”.

“They mean ‘posh’, right?” he said, showing off the word he learned on his last visit, and now likes to invoke at every opportunity.

“No, no, no. Never. Rarely. Well sometimes,” I said, before the husband and I treated him to a good 20 minutes, rich with anecdote and example, on all conceivable occasions for the deployment of “grand”.

In essence, he is so happy, it’s making him miserable. During his and his colleagues’ upcoming dopamine fast, they would avoid screens and 'would not touch other bodies for any reason, especially not for sex'

“Grand”, we explained, with no small degree deal of national pride, can run the spectrum from thoroughly disappointing, to barely tolerable, to entirely adequate, to slightly uppity, to horrifically pretentious. The ambiguity is the point. As a nation, we try to avoid being forced to commit ourselves too firmly to anything, which is how we’ve managed to navigate our way through decades of political strife, and some of the thorny social issues of recent years.

When you live on an island this small and this damp, you spend a lot of time indoors trying not to fall out with other people, we concluded, as we triumphantly wrapped up the lecture. Ireland’s secret weapon is the word “grand”.

He left the next morning on the early train back to Dublin, and texted that the food, company, board games and the coffee on the train were grand. I’ve no idea whether he actually enjoyed himself or not. If he keeps this up, he’ll be entitled to an Irish passport.

One of the other things we talked about was how we have ceded so much of our autonomy, attention and psychological wellness to the device in our pockets. He brought to our attention the latest Silicon Valley wellness fad – a phenomenon called “dopamine fasting”, which is what thrusting Valley types do when they suspect their system is overrun with the so-called happiness hormone, largely because of all the time they’re spending plugged into their phone, microdosing on dopamine. (J, to be clear, is not a proponent of dopamine fasting. He’s grand as he is.)

When they simply can’t cope with any more happiness or pleasure, they go on a fast, which chiefly seems to mean avoiding anything with a screen, though the most extreme proponents also avoid other people, food, exercise, eye contact and sex. (I promptly pulled out my phone, as J raised a knowing eyebrow. “I’m emailing myself a note so I remember to write a column about this,” I told him.)

The next day, I looked up dopamine fasting, and of course there were already dozens of articles on the subject. One in the New York Times quoted 24-year-old James Sinka, a start-up founder and evangelist for dopamine fasting. “We’re addicted to dopamine,” he explained. “And because we’re getting so much of it all the time, we end up just wanting more and more, so activities that used to be pleasurable now aren’t.”

In essence, he is so happy, it’s making him miserable. During his and his colleagues’ upcoming dopamine fast, they would avoid screens and “would not touch other bodies for any reason, especially not for sex. No work. No eye contact. No talking more than absolutely necessary.”

As it’s a fad originating among the tech bros of Silicon Valley, it is being treated to acres of semi-serious analysis by Stanford neuroscientists

The very short list of things they permit themselves to do includes brief walks in boring places, and sun salutations. After 24 hours of fasting, they return to work, rejuvenated and ready for more whacks of dopamine.

It occurred to me as I was scrolling through the dozens and dozens of articles on dopamine fasting – several invoking the expert views of psychologists and examining the origins (a LinkedIn post, naturally) and “science” behind the practice – that if this was a wellness fad being promoted by Gwyneth Paltrow, everyone would immediately start cackling about vaginal steaming. But as it’s a fad originating among the tech bros of Silicon Valley, it is being treated to acres of semi-serious analysis by Stanford neuroscientists, some of whom pointed out that dopamine fasting fundamentally misunderstands what dopamine does.

It is worth reminding ourselves what a phone actually is – it’s a communication device and a productivity tool. That’s all. The idea that it has, in the 13 years since its invention, gained almost mystical status, and now ranks in equivalence to food, sex and human contact in terms of its ability to shape your mental state is, frankly, depressing.

My advice is to by all means put the phone down. But don’t run away from pleasure. Lean in to the things that make you happy. Have some fun. Take a walk. Forget saluting the sun, and find yourself a human to salute instead. You’re grand, in every possibly sense of the word.

Style notes for a fashionable summer
6

‘My partner lasts only a few minutes in bed. Any advice?’
8