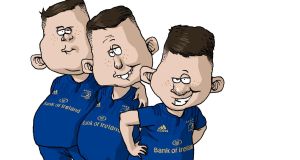 ‘Boisterous? They’ve mouths on them like rappers. What if one of them drops a fock-bomb live on air?’

“Oh my God,” Sorcha goes, “you will never guess what happened today!”

I’m there, “Melissa Mills Bari reposted your Outfit of the Day on Instagram?”

“No – although that did actually happen about a week ago. No, Ross, I was in Morks and Spencer in Dundrum, doing the non-perishables Christmas shop and this woman came up to me and storted admiring the triplets.”

She’s like, 'Of course I said yes! This is what every South Dublin parent dreams of! Why would I turn it down?'

“Jesus – did you tell her she could have them if she liked them that much?”

“Sondra was her name – with an O. And, at the moment, she’s working as a researcher for the actual Late Late Show. Anyway, like I said, she thought Brian, Johnny and Leo were – oh my God – so cute. I suppose they are – from a distance.”

Yeah, from five miles out at sea – with a dense fog forming.

She goes, “This is the really exciting bit, Ross. Sondra wants them to appear on the Late Late Toy Show on Friday!”

She’s like, “Of course I said yes! This is what every South Dublin parent dreams of! Why would I turn it down?”

“Okay, have you actually met our kids before?”

“Oh, I know they can be boisterous.”

“Boisterous? They’ve mouths on them like rappers. What if one of them drops a fock-bomb live on air?”

“They won’t. Because I’m going to talk to them about it.”

“So, what, after two years of basically ignoring their swearing in the hope that it would just somehow stop, you’re now going to tell them that it’s wrong for children to use that kind of language?”

“Saying the F word, and the B words, and – unfortunately – the occasional C word, is all well and good when it happens in Storbucks or at Mass. But, like you said, Ross, we can’t have them doing it live on national television.”

“Yeah, that’s why I’m saying we shouldn’t let them go on national television.”

But Sorcha is not for turning. She reaches into her bag and whips out an Etch A Sketch. She goes, “Sondra gave me three of these! They’re doing a thing on, like, retro toys! She wants the boys to try them out and tell the nation what they think!”

I follow her into their bedroom. Brian and Leo are rolling around on the floor, half-killing each other, while Johnny is standing on a chair, gobbing into the fish tank.

“Now, goys,” Sorcha goes, “I’ve got a little present for each of you,” and she shows them the Etch A Sketches.

And Sorcha’s there, “Johnny, if you use that word, then you don’t get to play with it – do you understand?” and you can nearly hear the little wheels in his head turning.

She hands them each an Etch A Sketch. Hilariously, they all stort tapping and swiping the screen, thinking it’s, like, an iPad. Then, when nothing happens, they stort holding down the knobs, trying to reboot them. It’s funny.

“This is a pile of focking shit!” Leo goes and Sorcha – I swear to God – takes the thing off him.

She goes, “Right, you don’t get to play with yours because you used two bad words.”

Sorcha’s there, “Okay, will we give you another chance?”

Anyway, this continues for most of the week. The boys play with their Etch A Sketches for three or four hours a day, and, every time they let a bad word slip, Sorcha takes it from them. By Thursday night, the night of the Toy Show rehearsal, she announces that the boys have been – and I quote cured?

It’s with hope more than confidence that I end driving us to RTÉ that night. They literally haven’t used a bad word in, like, 24 hours and – weird as it sounds – it actually feels like they’re someone else’s children.

She goes, 'Thank you so much for having our boys on the show tomorrow night', and straight away I see the concern on the dude’s face.

Sondra meets us at reception, then brings us into the actual studio, where there’s, like, 30 kids playing away quietly. Brian takes one look at all the toys and goes, “What the fu-” but he manages to stop himself mid-word. He goes, “Sorry, Mommy!”

And Sorcha’s there, “You did very well to stop yourself, Brian!”

Tubs arrives then. Sorcha ends up being a bit smitten by him. She literally curtsies when he says hello to her – I’m presuming it’s a Blackrock College-Mount Anville thing – and I end up having to apologise for the girl.

She goes, “Thank you so much for having our boys on the show tomorrow night”, and straight away I see the concern on the dude’s face.

He’s like, “Your boys? They’re coming on the show?”

Tubs sees the boys then and – in fairness to him – he gives them the benefit of the doubt. He goes, “Ah, you got the Etch A Sketches! Let’s see what you’ve drawn!”

Then he looks at Johnny’s and he’s like, “And you’ve written – okay, you’ve written, ‘Christmas’. That’s lovely – it’s going to be a message from the three of you, is it? And what have you written?”

He looks at Leo’s screen. And – I swear to God – the colour suddenly leaves his face like water pouring out of a bucket.

We never find out what Leo actually wrote. Tubs just immediately erases it. But it must have been bad because the dude actually seems in shock, then he catches Sondra’s eye and just shakes his head while mouthing the words, “No way.”

Unless I’m very much misreading the vibe, it’s pretty clear that our boys won’t be appearing on the Late Late Toy Show.

“Fock’s sake!” Leo goes – annoyed at having his hord work destroyed like that. “The fock are you doing?”

Brian’s like, “We’re not supposed to focking swear!” and he smashes Leo over the head with his Etch A Sketch, which prompts Johnny to rush to Leo’s defence by smacking him full in the face with his.

Sorcha just bursts into tears as she watches yet another dream die.

“Sorry, Mommy!” Johnny goes, attempting to comfort her. “Can we get the fock out of here now?”