Tony Sherlock obituary: ‘He was loved everywhere he went’

Dubliner loved to sing, swim and walk, and brought out the best in those he knew 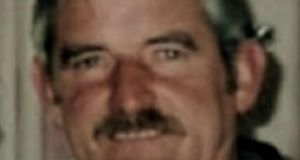 Tony ‘Shocks’ Sherlock earned his nickname from an incident at a clothing factory on Cork Street in which he worked.

Tony ‘Shocks’ Sherlock loved to sing and swim, and walk. He walked everywhere, the road was never too long. His favourite song was the Hollies’ He Ain’t Heavy, He’s My Brother. Another was Bob Marley’s No Woman, No Cry.

He would sing both, and others, on Sunday evenings in Walkinstown’s Cherrytree pub. They flew the Dubs’ flag at half mast there when he died. So did the neighbours on Limekiln Green in Walkinstown, as they lined the road for his funeral, for Shocks. It was said “he could make even angry people laugh”.

The nickname followed an incident years ago at a clothing factory he worked in on Cork Street. The electricity stopped, and checking out why, he reached to a plug and was stuck to it. He pulled a shoulder and they say his heart stopped. He recovered, but had a triple bypass years later.

Anthony was ninth in a family of 13 born to Michael and Bridget Sherlock at Keeper Road in Drimnagh. He followed his father to the CIÉ depot in Ringsend, and worked at various jobs around the city afterwards, sometimes on the buildings with his brothers.

“He made them the best, most fun, crazy, wonderful days of our lives. Going to work with him was fun,” recalled brother Gerry. “He was loved everywhere he went. Growing up in Drimnagh he was known like the lord mayor.” Later, in Walkinstown, there was hardly anyone “who did not know of Shocks Sherlock with fondness and a smile”.

At family get-togethers, “and we had many of them”, he “had a way of bringing out the best in all of us, a great gift,” said Gerry.

Shocks was 72, with underlying health conditions, when he got Covid-19 last March. He was brought to Tallaght hospital by his brother Cyril, the last family member to see him alive.