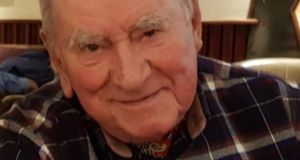 William Francis Cooper loved railways and dedicated his free time to building a model railway in the attic of the family home in Raheny.

William Francis Cooper always dreamed of returning to education, a goal he achieved following retirement in the late 1990s.

Born in Dublin in August 1930, William grew up in Marino. The eldest of six children, he often helped to care for his younger siblings and excelled in school.

When he was 13 he left education to embark on a career in printing and trained as a compositor (typesetter). He rose up through the ranks and went on to become a sales director and marking director of a printing company.

William married and had seven children. He loved classical music, particularly Beethoven and Brahms, and was an accomplished piano player who delighted in entertaining the family. He always played Handel’s Messiah at Christmas, a tradition the family continues to this day.

“Christmas is not Christmas without it,” says his daughter Adele McGovern. “As kids we’d wake up to it every Christmas morning so it has to be played in our house at some stage on Christmas Day.”

In the late 1990s, in his late 60s, he fulfilled his ambition of returning to education and completed an undergraduate and master’s degree in history with a thesis based on his family’s history.

“He loved Trinity and because of his age he became great friends with most of the professors,” says Adele. “He referred to them as the academics and up until shortly before he died he was still having weekly visits from them.”

William loved railways and dedicated his free time to building a model railway in the attic of the family home in Raheny. When Adele was eight years old, the railway appeared in an exhibition at the Kilkenny design shop on Dublin’s Nassau Street. “It took up the entire attic and was the old Dundalk line. The detail was incredible and when you looked through the tiny houses you could see household items on the tiny tables. My mother even made tiny bras and knickers to hang on the washing line.

“The engines cost a fortune but every now and again he’d lift you up and let you flick a switch and the trains would go in different directions.” William passed on this love of trains to his grandchildren, including one who now works as a train driver in England.

William moved into a nursing home in December 2019, just one week before his son Michael died. He developed a cold over the Easter weekend and a few days later he tested positive for Covid-19. He was transferred to Beaumont Hospital where he spent the final week of his life.

“The staff at Beaumont was absolutely incredible. The nurses would ring me every day to check in. The whole country thinks people are dying on their own at the moment but they’re not; I was with my dad for 3½ hours before he died. My brother arrived an hour after me. We had all the gear on but I could hold his hand and talk to him.”

William died on April 30th, aged 89. He is survived by his wife Eileen, his six remaining children, grandchildren, great grandchildren and many friends. The family takes great comfort in the knowledge that William and his son Michael have been reunited and are “sharing a small sup of Jameson whiskey and stories of Michael Collins, the first World War and Churchill”.