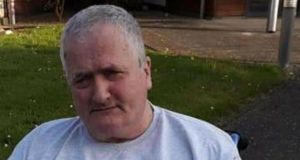 Jimmy Grogan: A native of Knockanally, Donadea, Co Kildare, he lived on the Bulfin Road before moving to Clifden Drive in Ballyfermot.

One of the daily rituals in Jimmy Grogan’s working life for the Office of Public Works was to lower the Tricolour at the Royal Hospital Kilmainham, in Dublin, every evening.

His son Mark recalls that he would help his father with the job.

“He’d come home and have his dinner and I’d walk back with him and we’d take the flag down which was on top of the castle at the gates across from Kilmainham jail.”

Jimmy worked for the OPW for 40 years as a general operative. He did not have a professional trade “but was an all-rounder”.

A native of Knockanally, Donadea, Co Kildare, he was born into a farming family on February 18th, 1947, one of seven boys and seven girls.

He went to the local school in Newtown and afterwards one of his first jobs was in a chewing gum factory in Kilcock. “He told me it was the worst job he ever had and he hated chewing gum afterwards.”

It was in Kildare at a dance that he met his wife, Eileen O’Brien.

When they married, they lived in Dublin, first in Inchicore on the Bulfin Road right around the corner from the Royal Hospital, before moving to Clifden Drive in Ballyfermot. The couple had nine children – one girl and eight boys.

Jimmy was a proud Kildare man when the Lilywhites played in the GAA championships. “They didn’t get too far very often but the white flag would go up on the door and it would be hanging out the window” – this would cause great banter with the neighbours in a deeply Dubs-supporting community. He also loved to watch American WWE wrestling on TV.

He never drank or smoked and was a weekly Mass-goer and very family-oriented. And when the family lived in Inchicore, he would cut the grass at the local St Michael’s Church in his spare time.

“He loved his family and he lived for his family. He was an old-school, family-orientated type of man,” his son says.

“He loved having a conversation over a cup of tea. If you had a problem, the first thing he’d do is put the kettle on.”

But as soon as he retired he developed a heart complaint and had two valves inserted. He recovered physically but came out of the operation with dementia and two years on moved into Cherry Orchard Hospital.

“He never got to enjoy anything,” Mark reflects.

Jimmy lived in Cherry Orchard for seven years, until he contracted the Covid-19 virus.

The family was not allowed in to visit him for several weeks because of the restrictions but got a call early on the morning of his death.

His daughter Shirley and eight sons – James, Mark, Richard, Bernard, Michael, David, Christopher and Edward – stood at a small window outside the hospital looking in, staying there until his death at 12.30 pm on April 17th. He was 73.

When his hearse passed the family home, his neighbours lined the road holding up, then releasing, white balloons to represent his beloved Lilywhites, before applauding their popular neighbour.

He was buried in Newtown cemetery, Co Kildare, beside his mother and father, Anne and Christopher Grogan.