Lives Lost to Covid-19: ‘What she craved more than anything was a family of her own’ 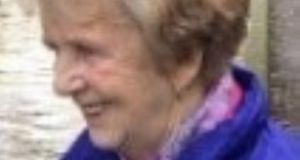 Teresa O’Brien: She loved to look after her 15 grandchildren, and knew their ‘unique quirks and personality traits’

Teresa O’Brien had a tough start in life. A frail baby when she was born in Dublin in September 1934, she was immediately given up to be fostered.

It was, however, a happy placement, and her foster mother Margaret Byrne went on to adopt her and brought her up in Beggar’s Bush. Teresa O’Rourke, as she was then, went to school at the Sisters of Mercy on Baggot Street, and throughout her childhood she shared her home and formed a bond with other foster children.

Teresa’s children remember the stories she would tell of this time in her life.

“She described vividly a time as a young girl, whilst crying uncontrollably, she ran behind a car that was taking away Dorrie, a girl she had come to love as a sister. This memory never left her,” says her daughter Sinéad.

Teresa later went to work in the Kelmac garment factory. She was an overlocker, stitching hems and seams to ensure they did not fray.

It was at a dance in the scouts hall in Donnybrook that she met her husband, Ken O’Brien. He worked in the Raleigh bicycle factory and went on to work as a trade union official with the then ITGWU.

When they married in 1959 they first lived in a two-up, two-down on Dock Street in Ringsend, before moving to Kilnamanagh.

Teresa’s early experiences in life had shaped her.

“What she craved more than anything was a family of her own,” says Sinéad. And she got her wish as she went on to have five children: Ken, Pat, Dermot, Sinéad and Deirdre. She devoted her life to looking after her family and loved to have her children around her.

Teresa and Ken were 25 years married before she left Ireland for the first time: to mark their anniversary they went to Sardinia. After that there was no stopping them. “They got the bug and went everywhere,” says Sinéad, including to the US, the Virgin Islands, and on cruises. “They went all over the place.”

Teresa also loved exercise and, long before fitness became popular, she was doing regular aerobics classes. She walked everywhere as she never learned to drive and when Ken retired they joined the gym, going regularly to the Tom Carey gym in Tallaght and then Ben Dunne’s.

She also loved to look after her 15 grandchildren. “She understood each of them individually, including their unique quirks and personality traits,” says her daughter.

Teresa continued to care for Ken, whose health had deteriorated, but she was diagnosed with Alzheimer’s disease six months before his death in 2015. She remained independent with family help until February 9th, 2018 when she moved to Kiltipper Woods Care Centre, where her family says she had two very happy, content and dignified years.

She tested positive for Covid-19 nine days before her death but battled on, surprising everyone. The family had not visited but continued daily video calls.

So staff moved her to a different room they could access. “We went in one by one and talked to her through a window,” says Sinéad. An hour after they got home on April 21st, the call came to say that she had died.

She is buried in Deansgrange Cemetery with Ken.