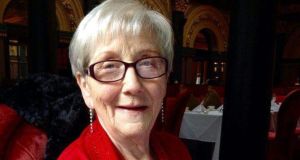 Ruth Burke: “She was quite witty. Daniel O’Donnell was one of her favourites.”

Ruth Burke (82) was the first woman to die from Covid-19 in Northern Ireland.

Her death in the Antrim Area Hospital on March 24th prompted her daughter Brenda Doherty to go on BBC Radio Ulster’s popular Talkback programme and tell people to “wise up” and stay indoors.

Ruth Burke (née Madden) was brought up in Enniskillen, Co Fermanagh, but grew up in north Belfast.

She and her husband, Richard snr, were married in 1961. Richard died from cancer in 2011, shortly after the couple celebrated their 50th wedding anniversary. They had five children and the family home was in Newtownabbey in Co Antrim.

The couple’s fourth child, Richard jnr (16), died in tragic circumstances in 1984, having been diagnosed with a brain tumour two years previously.

“It was a big thing for our family when he took ill and died. Mum and Dad nursed my brother. A certain part of Mum and Dad went with him,” says Brenda.

“I remember when my daddy said, ‘how can we go on?’ She said they had four children. Our mum lived for us. Her life was all about family. She would have done anything for us. We were her life.”

Ruth worked as a dinner lady in the Rosstulla special school in Newtownabbey. “She used to call herself a domestic technician,” says Brenda. “She was quite a mischievous wee woman and loved to play tricks. She was quite witty. Daniel O’Donnell was one of her favourites. She kept us going through the years. We were able to give something back to her in her later years for all she gave us during her life.”

Ruth had underlying conditions including kidney failure, diabetes and an irregular heartbeat, but she had lived with those conditions. “Mum was coming home until she caught Covid-19,” her daughter said.

She first fell ill at the beginning of January with a chest infection. On March 11th, she was admitted to Antrim hospital. She was supposed to go home on March 20th, but there was a problem with the care package.

Further blood tests revealed she had tested positive for Covid-19. Brenda saw her mother for the last time on March 19th. “She just wanted to know when she was coming home,” she recalls. “I left and that was the last I saw of her. The doctor rang us to say that she was really ill and would not come out the other side of it.

“We were able to spend time with my father when he died with cancer. Not to be with Mum was the hardest thing ever, but I can understand why we weren’t.”