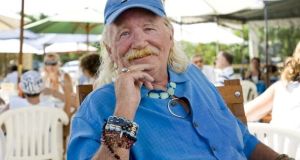 “He was such a big character I can’t even put it in words. He was in a league of his own,” says Cyril Fitzsimons’s son Richard of his father.

Born in Dublin in 1943 to parents Eilish and Phil Fitzsimons (of the auctioneers Hassett and Fitzsimons), Cyril Fitzsimons grew up in Ballsbridge. He had two brothers, Michael and Philip, and three sisters, Nuala, Olivia and Elizabeth.

He was educated at Blackrock College and left Ireland for the US in 1964, where he joined the US marines and ended up fighting in the Vietnam War.

There is a chapter about Fitzsimons in a book called Why Marines Fight by James Brady, where the Irish man describes his time fighting the Viet Cong in the hills above the Tam Ky river.

“The VC were fearless, skinny young kids coming at you in shorts and bandannas, armed with old M-1 rifles. It was suicidal the way they came at us to the wire, carrying Bangalore torpedoes to blow holes in the wire they could come through,” Fitzsimons told the author.

After eight months in Vietnam he returned to Ireland, where in 1969 he opened his first bar, The Silver Tassie in Loughlinstown.

After three years at The Silver Tassie, he found himself wrapped up with the IRA and he was arrested for possession of explosives in 1972, at the height of the Troubles. Fitzsimons decided to travel to Spain the following day in order to skip bail.

He stayed there for 12 years, running four bars in Barcelona, before returning to the US to open a bar in Manhattan with well-known publican Eamonn Doran, as well as his own place called Murphy’s on Second Avenue.

He had married Sheila Clancy in Las Vegas in 1986, but the marriage ended after nine years.

Fitzsimons grew tired of Manhattan, and having spent summers in Montauk, he decided to move out there permanently in 1990, selling his Manhattan bars and buying a clam bar on the main highway in Napeague.

It didn’t take long for Cyril’s Fish House to become the face of the Montauk party scene, with hundreds gathering outside the roadside bar on summer evenings, and celebrities like Jerry Seinfeld, Billy Joel and Paul Simon becoming regular visitors.

“It was a place on the side of the road that everyone in New York knew about. If you were coming out to Long Island or the Hamptons, everyone would stop there. It doesn’t matter what kind of person you were – everybody from celebrities to normal people would be there,” Richard explains.

“He loved the restaurant, I know that for a fact. He spent an abnormal amount of time at his bars, that’s what he liked to do. That was his life.”

Fitzsimons spent winters in Anguilla, a Caribbean island where he also ran a bar, where Richard says he was “just as well known and loved”.

Cyril closed his beloved Fish House in May 2016 after the expansion of the business was found to be a threat to public safety.

“The end of Cyril’s Fish House marked the end of an era,” Richard says.

“It was a great bar, and it was part of such a great time out here.”

Cyril was in New York when he suffered a stroke in March this year. He died on April 24th after contracting coronavirus.

Richard remembers his father as “such a big person” and says “his name will be known forever in the New York area”.

“Any person who spent time with him would tell you the days they spent with him were the best days of their lives. There’s nobody who’s ever been in his life who ever thought otherwise,” he adds.

Cyril is survived by his longtime partner Prudence Thomas and their children Richard and Kimani.