Frank Cullen obituary: Jazz-loving Dubliner who played until the end

Lives Lost to Covid-19: He knew hardship but never let it get in the way of laughter 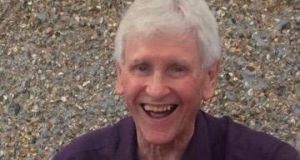 Frank Cullen: A northsider who “emigrated” south of the Liffey with his wife Peg in 1967

This article is one of a series about people who have died with coronavirus in Ireland and among the diaspora. Read more at irishtimes.com/covid-19-lives-lost. If you would like a friend or family member included in the series, please email liveslost@irishtimes.com.

Lovable, musical, charming and funny are words used by family to describe Frank Cullen. Known as Frankie to his siblings and many friends, but always Frank to his wife Peg, he was from that war generation who knew hardship but never let it get in the way of laughter and shenanigans.

Laughter was Frank’s daily medicine. Friends and family were always treated to enormous hugs and kisses, and his big happy smile. Neighbours and acquaintances, even strangers on the street were all gifted a nod, a smile and a chat.

Frank was a kind and warm-hearted family man; a loving husband, father, brother, grandfather and great-grandfather, and a valued friend.

Born in Cabra on Dublin’s northside in 1935 to Jim and May Cullen, Frank was one of five children. He left school at the age of 15, and his long and varied working life took him from the rag trade, to tyre fitting, to the life assurance business, where he eventually ended up as a broker.

On the day he began work as a tailor’s cutter in Modernware on Christchurch Place in 1956, he met Peg, who was a seamstress. After weeks admiring her from afar, he eventually asked her out, and after two years of “courtin” they were married on August 2nd, 1958. Their marriage lasted 61 years until Peg’s death in November 2019. The previous year they had celebrated their 60th wedding anniversary with their four children, eight grandchildren, two great-grandchildren and extended family and friends.

In 1967 Frank and Peg, both northsiders, “emigrated” to the southside of Dublin when they bought their first house in Greenhills. From there they went to Templeogue and then Clondalkin. With four little ones to feed, the 1960s and 70s were thrifty times but Santa was always generous, and the many summer holidays in Butlins, Courtown, Blackpool and Spain left the children with great memories.

Frank’s other great love was jazz. He was a talented musician, playing both saxophone and clarinet, and was active on the showband scene throughout the 1960s and 70s. When not playing his instruments he whistled and sang, tapping out drum beats on the steering wheel as he drove along listening to Stan Getz or Duke Ellington or whoever happened to take his fancy on a particular day. In the family home the mellow sounds of his tenor sax and clarinet became part of daily life, as Peg prepared meals and the children played to the sounds of Tequila and Stranger on the Shore, his two signature tunes. Frank continued playing right up to his final year.

Frank also loved sport, and played soccer from schoolboy age into his 30s. When too old to run, he took to golf and became a member of Newlands Golf Club around 1974. When Peg also became a member in the 1980s the two of them enjoyed rounds together, and became a well-known couple in the club. Frank was a regular performer at the Newlands variety shows playing his clarinet and sax.

Frank died on April 27th, having contracted coronavirus. Even at 85 years of age, his family say it was a life cut tragically short, for there was still plenty of reserve left in his tank.