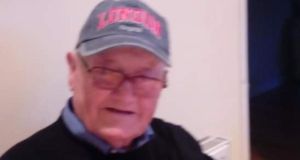 Patrick Brady: went often from London to Skibbereen with his wife Mary.

When Patrick Brady foiled an attempted Royal Mail post office robbery in the early 1970s, his bravery was rewarded with a medal from Queen Elizabeth at Buckingham Palace.

He was no stranger to the palace, delivering sackfuls of mail on his postal rounds. He also had responsibility for pension cash deliveries to post offices in the Chelsea area.

A native of Larabryn, Maynooth, Co Kildare, he moved to London in 1952 and worked for the Royal Mail all his life until retirement.

Born in 1934, he was the son of the farm keeper at Maynooth College and one of three siblings. His sister Mary died four years ago and his brother Harry survives him.

He grew up on the farm, emigrating to London aged just 17, and for the rest of his life he lived in the Barnet area, a suburban borough north of London.

He was a bus conductor for a few years before he joined Royal Mail. His act of bravery in foi.ling an attempted robbery occurred when he saw two men sneaking up behind the van with baseball bats. He challenged the duo, pinned one of them to the ground and held onto him until colleagues came to his assistance. The second accomplice was subsequently caught as well.

“The family was very proud of him when he received the medal for bravery from the queen,” his nephew James recalls. “And he got a great promotion out of it. ” He secured an office job where his responsibilities included logistics and liaising with police if postal vans were involved in collisions – and, in such an event, ensuring the mail was delivered safely to its destination.

Patrick met his wife, Mary Cleary, soon after he arrived in London. She is from Skibbereen, Co Cork, and the couple subsequently acquired a holiday home there, to which they travelled regularly. The couple had three children – Susan, Siobhan and Brendan – and four grandchildren. Susan died of cancer in 2018.

His nephew describes him as a “very jolly, very sociable guy” who travelled a lot with his wife. As well as their trips to Skibbereen, they were regular visitors to Greece and did a tour of the US in recent years. And when at home they dined out twice a week on Tuesday and Friday nights.

Patrick had only moved into a nursing home in the Barnet area in late July. When he had a minor fall, he was transferred to hospital for treatment. He stayed there for a couple of days. He died unexpectedly on April 9th, within 24 hours of his return to the home. Patrick was 85.