‘I didn’t want a 70th birthday party. I wanted poetry and cowboys in the desert’ 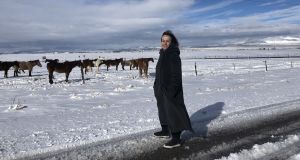 Isabel Healy, down on the range in Elko Nevada

As I approached the age of 70 I realised there was nothing I either needed or wanted in life. I had started to give things away rather than add to my life’s possessions. And while I liked the idea of celebrating seven decades and seeing old friends, I didn’t want to see them all together nor at the same time. I don’t like hosting big parties.

What I do like, what I love, is poetry, snow and cowboys. Ever since I was a little girl I have wanted to be Laura Ingalls Wilder from The Little House on the Prairie. Last year my husband alerted me to a podcast about the National Cowboy Poetry Gathering in Elko, Nevada, knowing I would love the subject. He thought he was widening my horizons but, in fact, I already knew about Elko.

It’s a tiny Northeastern Nevada High Desert town on the old California trail; a good ol’ wholesome town with a community college, a large population of Basques and an even bigger population of miners and cowboys, a legal brothel, snow in winter and an annual January celebration of Cowboy Poetry – roping in music, dancing, film, art, storytelling and discussion – which has been running for 35 years.

On mature reflection, I chose Elko as my party, my treat, my seven-decade gift.

The road to Elko from Salt Lake City is long and straight though the dull salt flats and, at the Utah/Nevada border, the bright whirligig lights of casinos. There is nothing but fence posts and railway line for 130 miles in any direction from Elko in the basin of the Ruby Mountains (which the mid-19th century settlers named before learning, to their disgust, that the actual jewel haul was garnets not rubies).

The headquarters of the Cowboy Gathering is the Western Folklife Centre, a non-profit organisation in the old Pioneer Hotel, working to collect, document and preserve the culture and traditions of the American West, the heartfelt heartland reflections and recollections not caught on celluloid. Down the wide streets with their buildings and scrubby verges the flax and dun of a Cheyenne mare, past the neon lights of fast-food joints and casinos (“Welcome NRA members”) in the other Gathering venue, the Elko Convention Centre, people were queueing for films, concerts, discussions and poetry, for coffees and Basque cookies, tasting rye whiskies, trying on turquoise jewellery, buying books.

Anywhere I go these days I am always the oldest person there, which is very strange, because I reckon I’m really still only in my thirties. In Elko I was definitely not the oldest.

Is everybody here old, I asked. “We weren’t when we started 35 years ago,” was the answer. Their hair was grey and often long, in plaits and ponytails (men and women) with a multitude of white moustaches, curled and curated, wound and waxed more carefully than a hipster beard. It was minus-7 degrees outside and they wore poke, bowler, rancher and buckaroo hats, ashtray tops and sombreros, waxed coats and soft fringed leather, silk neck scarves and silver buckles, turquoise jewellery, boots and sneakers and orthopaedic shoes. They stood in small groups in the bar and foyers, talking about their operations.

Ranch people get up early, for there are calves to be checked and horses rattling buckets at the fence

A country road. Evening. Front left of a backdrop of pink-painted sky, a huge leafless tree worthy of Godot branched over the main stage. It was as fitting for western folklore and music, for the cowboy poets and yodellers, as for Beckett. Same difference. Here were more squeeze-boxes in more musical traditions than in Annie Proulx’s Accordion Crimes, to swirl the swing and Cajun beat as zydeco swirled to a shining metal washboard worn as a breastplate by “French Rockin’ Boogie” Louisiana cowboys.

Ranch people get up early, for there are calves to be checked and horses rattling buckets at the fence. In white-plumed hats and sparkling uniforms, the Elko High School marching band started the day with Ghost Riders in the Sky before Hal Cannon (also 70) plucked his banjo and crooned “Early in the Morning, oh early in the morning . . .” to begin his keynote address. Another morning, we were riding Odyssian waves, discussing “Poetry over the years”.

Not everybody was a cowboy, working or retired. Joshua Dugat of the soulful eyes, an Alabama poet, beekeeper, prison arts teacher and new father, told us how he read Goethe at night when on Montaina Forest Fire patrol. We “rode the range of the blank page” with Vogue Robinson, poet laureate of Clark County, young, female, beautiful and black, advising “age-free, cage-free verse”.

On the feast of St Brigid, Olivia Romo (25) poet, feminist and Water Rights activist from northern New Mexico, strode the stage and read the rage: “My people are magical, but they are dying younger every year.”

As the festival progressed the audience got younger and more mixed, packing halls and auditoriums. Nobody fussed or fidgeted or went out for drinks, afraid to miss a single note, a word, a rhyme. Listening to Alaskan Inuit fiddling, we toe-tapped and clinked with strangers as wine was passed about.

I was wearing a silver inlay necklace from New Mexico and Tom, a retired aeroplane mechanic, stopped to admire its Zuni design. Tom loves cowboy gear so much, he had driven from California with his adult daughter, carrying two fishing tackle boxes full of jewellery. Dressed in floral embroidered black denim, he was one smart old dude.

In JB Capriola’s store, I spoke to a much-pierced spiky-haired girl. She asked if I was a poet and when I demurred, her grandfather – with whom she had driven from Washington state – said: “Own it! Say: ‘I fucking write!’” There, amid the steam from the hat stretcher and the smell of leather, in the workshop of one of the most famous saddle makers in the world, this 70-year-old woman said, “I fucking write!”

At Spring Creek, horses stood stock still against the whipping wind. I had never seen a vista the likes of this in all my born days

In Elko, what we call a patchwork or weaving of words to make poetry they call “braiding”. There was many an ode to an ole’ mare, but there are also images of golden koi fish being taken from cow troughs (where they were introduced to clean the algae) into the skies by golden eagles. Working writers and ranchers Yvonne Hollenbeck and Trinity Seeley – housewives with inner arms “branded by the stove” – introduced stories, saying, “. . . and so I wrote a little poem about it” or “. . . and so I wrote this song.” The most natural thing in the world.

I am not that old. Ramblin’ Jack Eliott is 87 and was finishing a five-state tour. I was marking 70 years on this beautiful earth, riding the words, riding the notes, riding the past, riding the present, riding the future – or maybe what I scribbled down should have been “writing” not “riding” – but this sea-level, island woman was riding high amid strangers in a land-locked desert at 7,000 feet.

It snowed before we left. As cowboys in low hats and high boots trundled their wheelie bags across the treacherous badlands of hotel car parks, we drove out to the Lamoille Canyon, a passage through the mountains. At Spring Creek, horses stood stock still against the whipping wind. I had never seen a vista the likes of this in all my born days. That exquisite image, and those in the stories, songs and rhymes, sent me home a wiser, richer woman. I also received the gift of a new vocabulary peppered with the likes of “cricket rolls” and “horse wrecks” and, having suffered three decades of derision from my family, I was at last vindicated by seeing so many stars on stage wearing perfectly creased blue denim jeans.

“Come again next year!” they said. If I went again to Elko I would not be a stranger; I would be amongst friends.