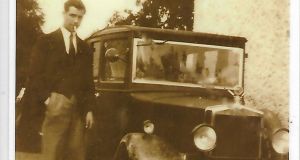 William Foran and his Model T Ford: ‘It was unusual to own a car at the time’

In the first few pages of his wonderfully evocative book Memoir, which describes his upbringing and subsequent life in Co Leitrim, John McGahern writes: “When I was three years old I used to walk a lane like these lanes to Lisacarn School with my mother.” The lanes referred to are those that run between the small fields and lakes in most parts of Leitrim but for McGahern they describe in a special way those that could be found in an area close to Ballinamore where he spent the earliest years of his life. The now long-closed Lisacarn School had two teachers at the time: Mrs McGahern and my father, William Foran.

While the very young John enjoyed walking the lane to Lisacarn, a school that he remembers as having only one room with the pupils sitting back to back on long benches and the windowsills full of wild flowers, he also recalls that, “Master Foran, whose wife was also a teacher, owned a car, a big Model-T Ford, and in wet weather my mother and I waited under trees on the corner of the lane to be carried to the school”.

Though McGahern’s father owned a “blue Baby Ford” and his Uncle Pat was a hackney driver in the town of Ballinamore, McGahern mentions, with reference to my father’s car, that owning a car was “unusual at the time”.

In this photograph, taken in the late 1930s but before the outbreak of the second World War, my father appears as a suave young man with his ubiquitous cigarette, looking every bit a likely contender for ownership of such a car. Family lore, however, would suggest otherwise. The Model T, I’m told, belonged to my grandparents, Timothy Foran and Julia O’Rourke who had by then both retired from their own teaching jobs and were living in Congress Terrace in Drumshanbo.

As father had a 29km round journey to Lisacarn and back they most likely took pity on him and offered him the car. When war broke out and supplies of petrol stopped, the Model-T was put up on blocks in a shed at the back of the house with my father then compelled to cycle to his school in all weathers. It had seen the best of its days and in time gave way to a sturdy black Morris Minor.

Older people on isolation: ‘I have plenty of food but not much appetite’
7