The world is round? How do you know? 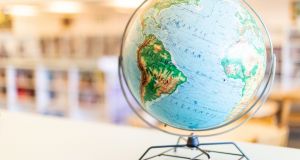 “Haven’t you read about this? It’s easy to know that the earth is not flat – just look into it” Photograph: istock

A friend of mine recently gave a lecture to first year university undergraduates which touched on what it means to know something. Out of interest, I sat in.

The students, mostly around eighteen, seemed horrified by my friend’s apparent incompetence when she asked sincerely how they can know, for example, whether the world is round rather than flat.

Instead of thinking that the question might be deeper than it appears, the students presumed that my friend was one of those flat-earth enthusiasts who lurk online, or that she simply hadn’t done her due diligence.

The bravest of them vocalised these thoughts with a note of horror in his voice – “haven’t you researched this?” he asked shrilly. “Haven’t you read about this? It’s easy to know that the Earth is not flat – just look into it.”

Of course, my friend does not think the world is flat; she was attempting to get the students to think about what is actually involved in knowing something. ”Who in this room,” she enquired, “has empirically tested the hypothesis for themselves?”

No one answered in the affirmative. “The person who can prove the hypothesis knows in a way that I don’t,” she went on. “I’m not a scientist, so I take it on authority that they are right, but if knowing something entails fully understanding it, or being able to prove it, then I suppose I don’t know. Do you?”

The young man in the front who had spoken up earlier looked a bit perturbed.

The line between knowledge and belief is now blurrier and more undulating than at any point during my lifetime, and likely will be for a good deal longer than that. We rely on authorities to tell us or to reinforce what we know or should know, and sometimes what we should believe, but facts seem more ubiquitous and less delineated than ever.

The fact that there is a bizarre online movement of people who truly believe that the Earth is flat attests to that.

As a writer, I want to write about events in the world, and if I want to pay my bills, such writings are far more likely to find an interested publisher when those events are at their peak in the news cycle. However, I find myself more and more reluctant to participate in a social media cycle that seems increasingly rushed and overconfident about what is known.

In the last several weeks, we have seen Empire actor Jussie Smollett understandably sympathised with and supported all over social media and in papers when news emerged that he had been the target of a racially motivated attack.

It instantaneously spawned unreserved and furious public statements on what the incident said about the state of America today, until increasing evidence indicated that Smollett had lied about the attack.

Reflected through a lens of signalling and emotion, the truth can change shape

Not just deeply immoral, this is a heinous inflammation of bigotry on all sides at a delicate time for race relations in the US. Very little sympathy endures for people who falsely claim the special treatment afforded to victims of serious crimes like the one alleged.

Such people drain resources which should go to those who are legitimate victims, but they also impose on and disrespect the collective good will of society in a way which many find difficult to forgive.

It seems evident, given the number of recent examples in the news in which events or situations first appear one way, and then turn out (as most things usually do) to be more complex in reality, that the best response when consuming and contributing to online content is to slow down and wait for more information.

Sympathy for victims is appropriate, but we could also be generally more charitable – not just toward victims and those who are perceived as victims, but to the fallibility of human interpretation and understanding.

Reflected through a lens of signalling and emotion, the truth can change shape. It takes mindful awareness to protect our humanity and that of others, not to lash out, and to think about what it is to know something.

‘My boss gives me information that is misleading . . . I am obviously being bullied’
Real news has value SUBSCRIBE