New to the Parish: Kasia Gwis arrived from Poland in 2006 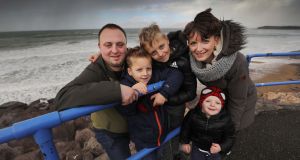 When Kasia Gwis followed her boyfriend Tomasz to the Iveragh Peninsula on the west coast of Ireland in March 2006 she did not plan on staying more than a few years.

The pair of 19-year-olds had recently finished their school exams and decided to move abroad to find work. When Tomasz’s friend got in touch to say he’d found a job in a place called Valentia Island he left for Ireland. Two months later Kasia arrived in Co Kerry.

“We were planning to spend 3-5 years to save up money to buy a house in Poland. We could never imagine being here for life. We had all our family and friends there, we had to get back. But then life just took off.”

Kasia and Tomasz both grew up outside the Polish town of Oswiecim - a place most commonly known for the concentration camp which once existed within its boundaries.

Kasia remembers visiting the Auschwitz-Birkenau memorial site on a school trip as a child but did not fully understand its global significance until she moved abroad.

“We were too young to fully understand it, we just always saw the buses with tourists. I knew it was a concentration camp run by Germans but when I arrived here and told people where I was from, it struck me that everyone outside Poland knew about it.”

After a few weeks on Valentia Island, Tomasz found work in Waterville and soon after Kasia got a job as a waitress in the town’s historic Butler Arms hotel. She remembers feeling surprised by the laid-back, easygoing nature of the local people.

“I could not believe people parked their cars outside Mace and left their keys in. It was a completely different mentality, in Poland you have to lock everything. It took me a while to get used to weather too. I could not bear the wind that first summer.”

Working among locals, Kasia quickly grew accustomed to the local expressions. “I was quite lucky because since day one I’ve always worked around Irish people. Even when there was a boom of Poles arriving, I was still surrounded by Irish so I picked up the accent and behaviours of the people.”

With their only child now living in Ireland, Tomasz’s parents also decided to move to Co Kerry. His father found work as a handyman and his mother cleaned people’s homes and looked after children.

In 2008, Kasia gave birth to her first son Kuba. She took time off work to care for her baby while Tomasz found a job at the Gala supermarket in Cahersiveen. Jobs on the west coast became increasingly hard to find as the country plunged into recession. However, Kasia remained resolute that staying in Kerry was the best option.

You can always count on people and count on their help

“I knew that somehow it would be better than going back to Poland and starting over again. I’m not saying we didn’t have tough times. We had weeks after Kuba was born with only €20 to live off. But the way we were raised, when you don’t have enough money, you live on a tight budget. And there were always jobs during the summer.”

In 2011, their second son Wojtek was born and soon after, the supermarket where Tomasz worked closed down. While working at Gala, he had learned to bake bread and when the business ceased trading Tomasz approached his wife with the idea of opening their own bakery. Kasia initially rejected the idea and told her husband he was crazy. However, over time she came around.

“In Tom’s house, when he was a child, they used to make bread so even before Gala he knew the basics. In Poland people were poor for many years, you really had to take care of your own family and make your own food. If there was a birthday or a communion you would never go to the restaurant, you always cooked at home.”

The couple applied for funding through the South Kerry Development Partnership and in 2014 opened the K&T Bakery in Cahersiveen. The first four months were a real strain with Kasia and Tomasz working from 4am to 8pm each day.

“It was just the two of us at the beginning; the plan was he would make the bread, I would make the cakes and I would sell the cakes. But after a week we realised we couldn’t do it, the demand was too big. People in Cahersiveen are very curious and came in to see what we were doing and they kept coming back.

“That was the only time we both forgot about our wedding anniversary because we were exhausted. Looking back I don’t know how we did it. I think we were so shocked by the amount of products we were selling and that people kept coming back for more.”

Two years ago the couple took the risk of opening a café next to the bakery but unfortunately their gamble didn’t pay off.

“We had our regulars and a small customer base but it wasn’t enough to keep going all year round. The summer was perfect but the winter wasn’t great. But the bakery is great, it pays for itself.”

The couple now have four people working in the bakery - Tomasz’s parents, a shop assistant and a driver who delivers to Waterville, Ballinskelligs and Caherdaniel.

Kuba and Wojtek attend the local primary school while Jasiu, born in 2015, is still at home. “The boys go to an English language school but they learn Irish as well. I wouldn’t agree for them to be exempted from Irish, it’s part of their heritage now.”

Kasia speaks Polish with her children and the family celebrate both Irish and Polish Christmas. “It was hard with the first boy because he only spoke Polish when he went to school and understood very little English. But he’s fine now. And my little baby, it’s like there’s a switch in his head. He can jump between English and Polish.”

After nearly 13 years in the country, Co Kerry is home for the Gwis family.

“Every time we go shopping we complain it’s far away but it’s just so beautiful here and safe. In the back of your head you think about what’s happening in the world and I feel much safer here than I think I would be in Poland. It is remote and the way everyone knows your business can be a bad thing. But it’s also a good thing because you can always count on people and count on their help.”